Matty had Thursday and Friday off of work, so I considered this a 4 day weekend for all of us!
Remember that 15 month check up that Lucy had last Wednesday? She’s never had a reaction to any of her shots before, but she got three of them on Wednesday and boy did they put a damper on some of our weekend! Our sweet baby woke up crying on Thursday morning, which she never does. Matty picked her up and put her on the changing table and she was super sweaty and pale and just laid there with her eyes closed. Her temp was somewhere in the 103 range.
Lucy has had fevers before and has responded well to the Tylenol, so I wasn’t too worried. I called the doctor just in case, though, and they confirmed that it’s probably a normal reaction to her shots and that it could last up to three days! I love snuggles, but not when she’s sick! 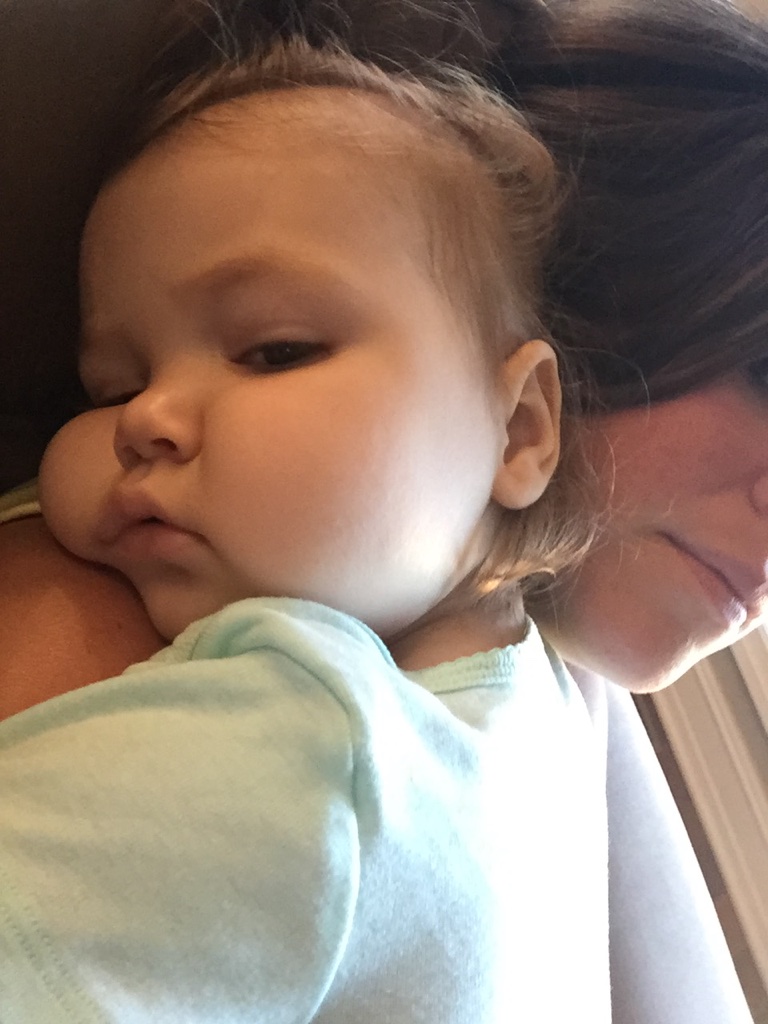 About 45 minutes after giving her the Tylenol, Lucy perked up enough to watch some cartoons with Sydney. 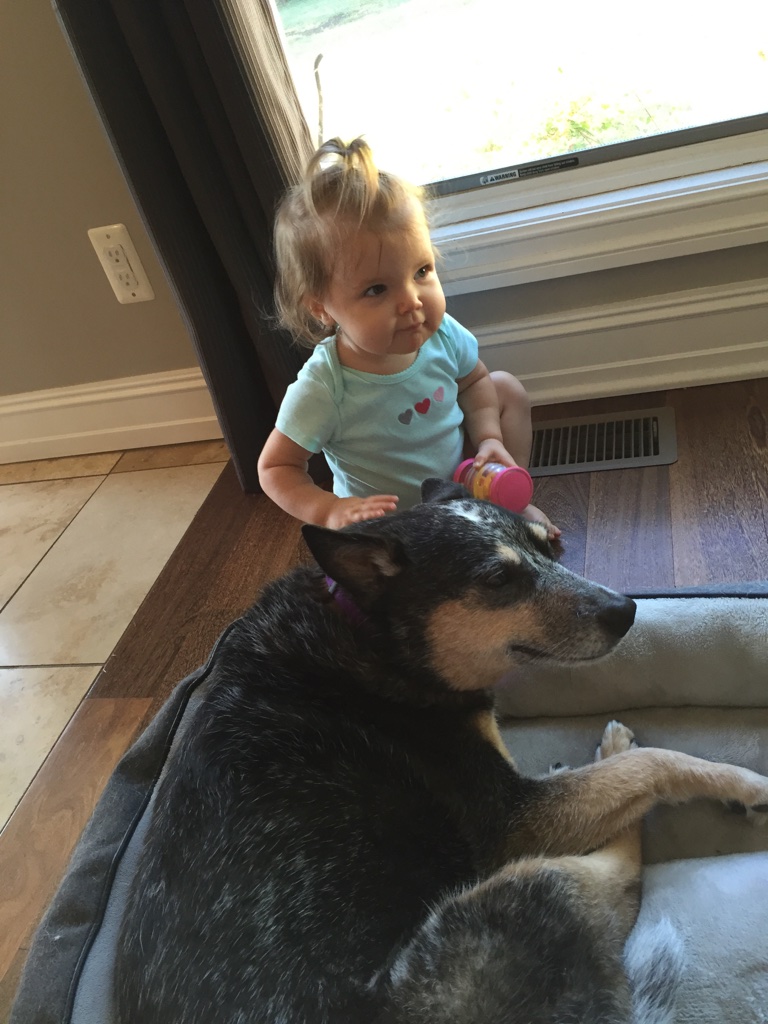 And then to give her some snugs! 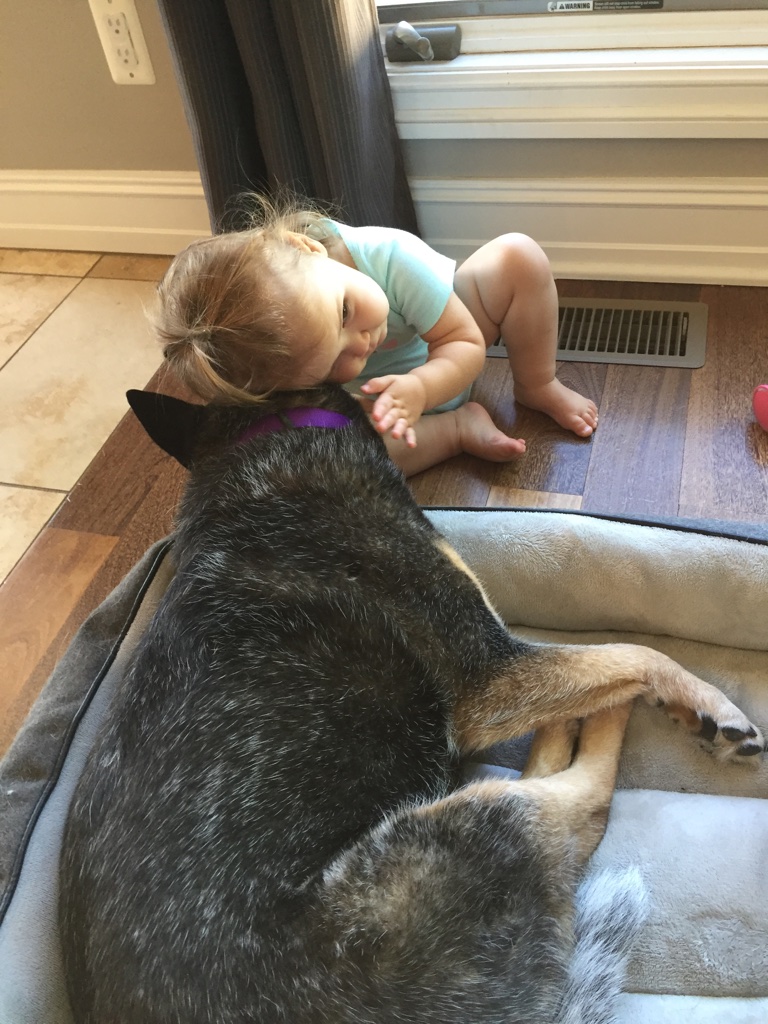 Sarah, Brian, and Cousin Tommy were in town for Tommy’s Baptism, so we drove down to Grandma Ri’s house late Thursday morning to see them. 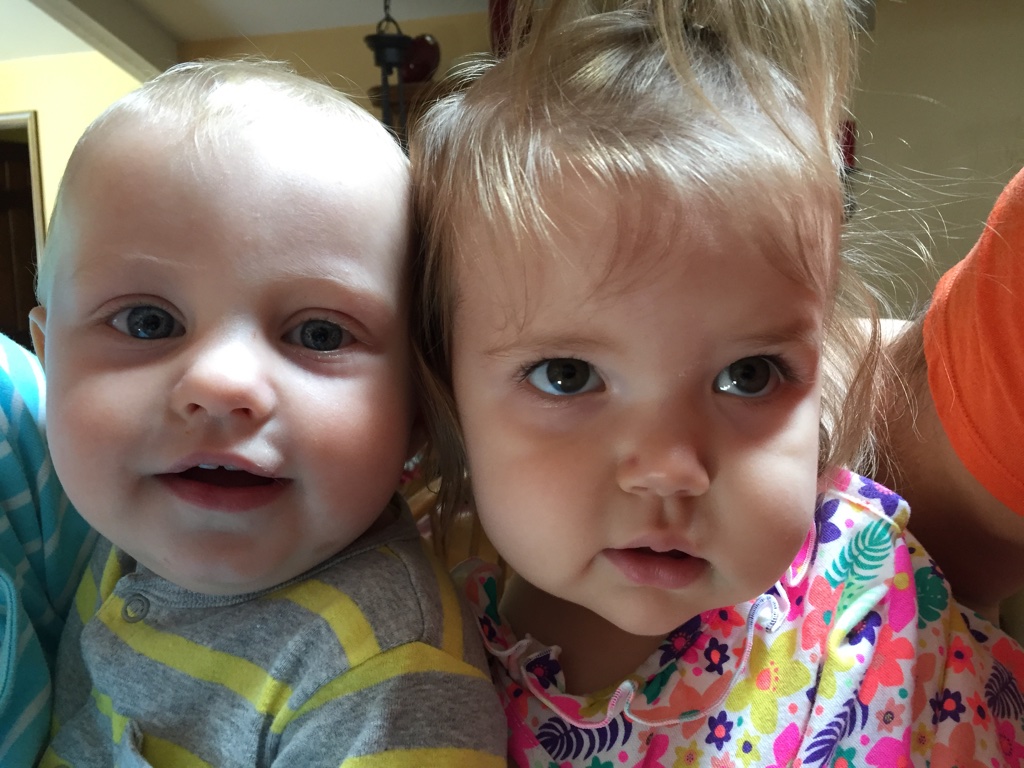 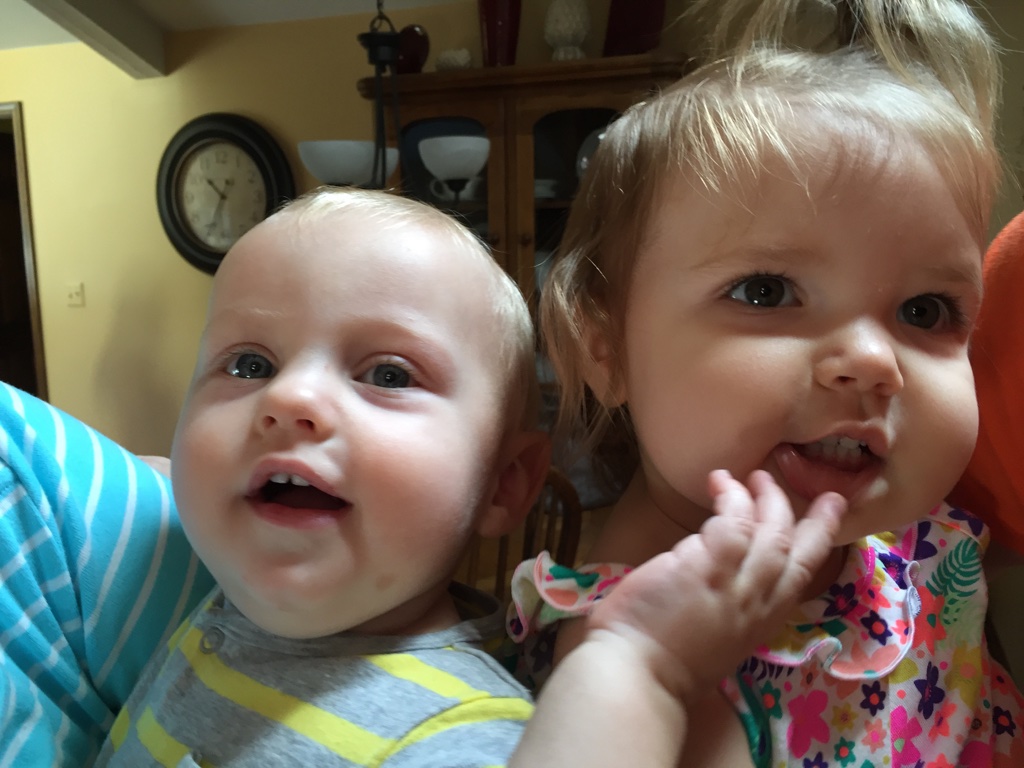 Don’t worry, no babies were hurt in the making of this photo. In fact, I think Tommy quite enjoyed it! 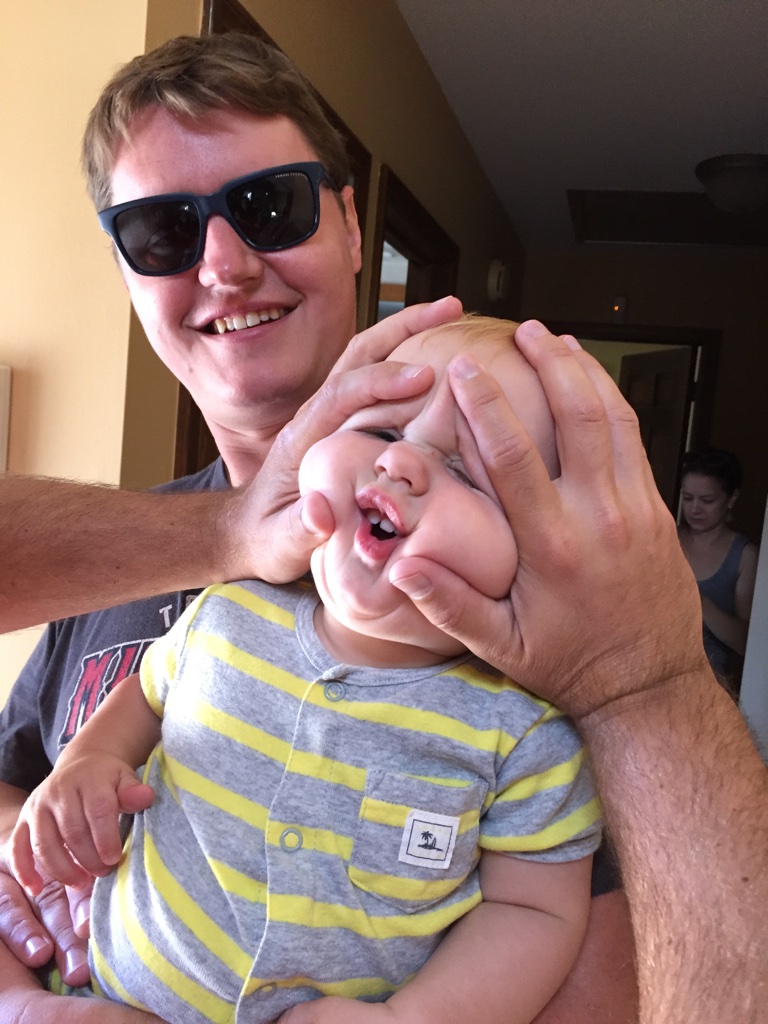 Alas, I could tell Lucy wasn’t feeling well so I loaded her up and headed home while Matty and Brian headed to the Tigers game. For the rest of the afternoon there was a lot of sleeping and a high fever. 🙁 Friday we went out for a nice lunch at Savannah’s to celebrate Brian’s birthday and Tommy’s upcoming Baptism. It was very nice, and I have zero pictures. Probably because I was up every hour or so with Lucy throughout Thursday night/Friday morning rocking her and giving her a lukewarm bath so my mind wasn’t working properly.
The fever came and went all day, but when we got home Friday afternoon she felt super warm and her temp was 105.0! I called the doc because they had said anything over 105 was a trip to the ER. The nurse said to give her Tylenol and let her sleep. If the temp hadn’t come down after her nap then we should take her in. Thankfully, it was down to 103.5, but she still wasn’t feeling that great.
My only picture from Friday. This was at about 8:30 when we had finally gotten Lucy to go to sleep for a bit. Some people go out to the bar . . . we stay in and vacuum! 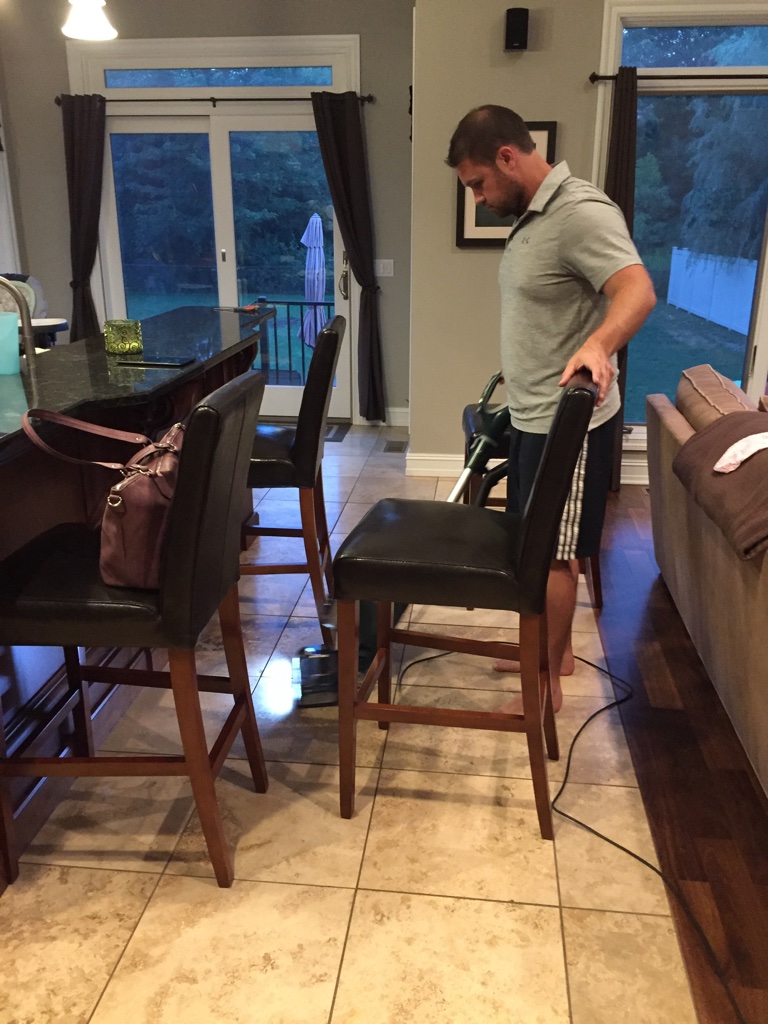 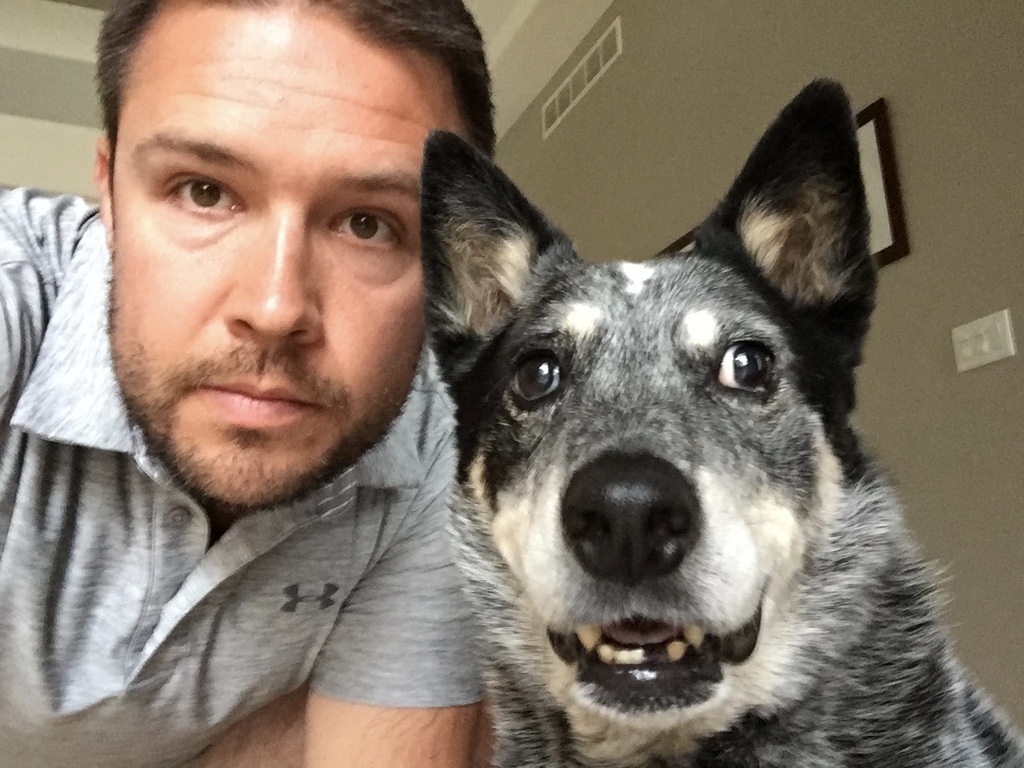 If Lucy’s fever was still high on Saturday morning, we were going to leave her with my parents for Tommy’s Baptism. But it was only in the 100 range and she was acting like herself . . . and we like having our girl with us! So we brought her along . . . and took a cheesy church selfie. 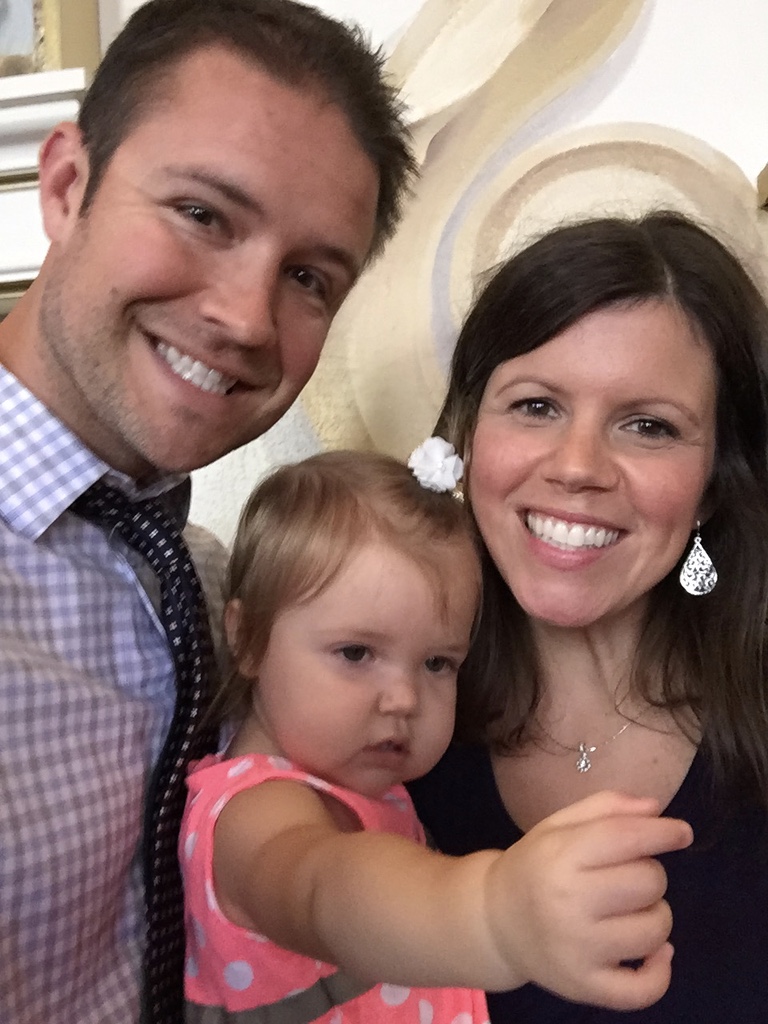 Lucy was fascinated by the angel statues. 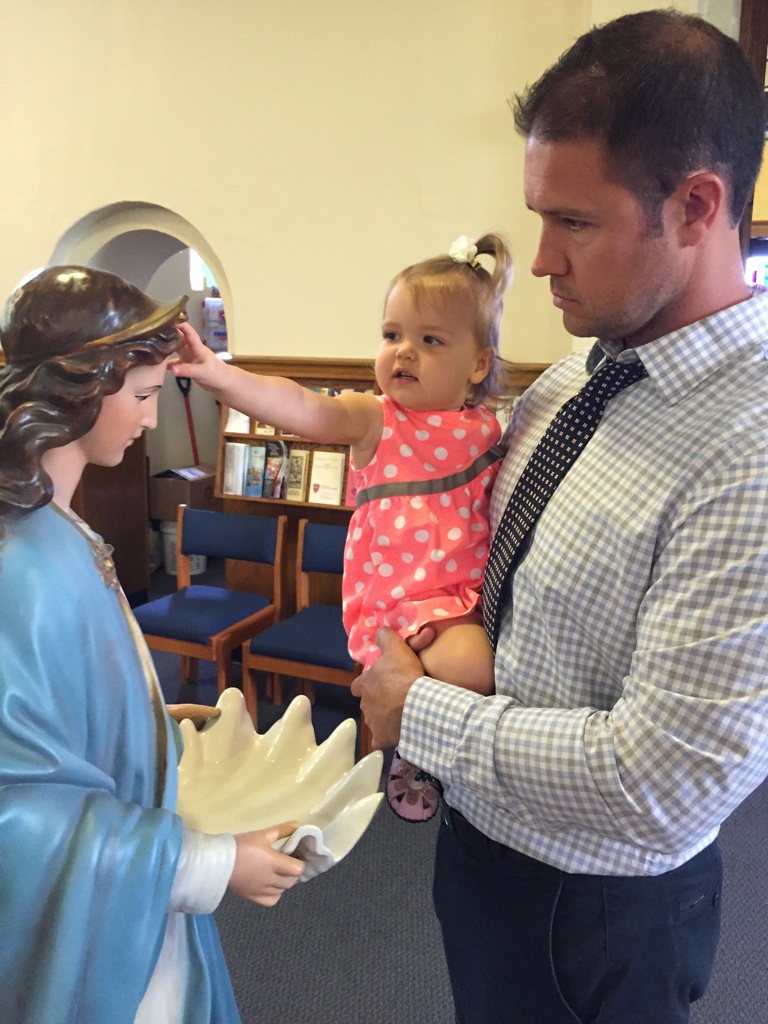 Oh my heart! Can we recreate this picture 25 years from now when Lucy’s in her wedding dress?? 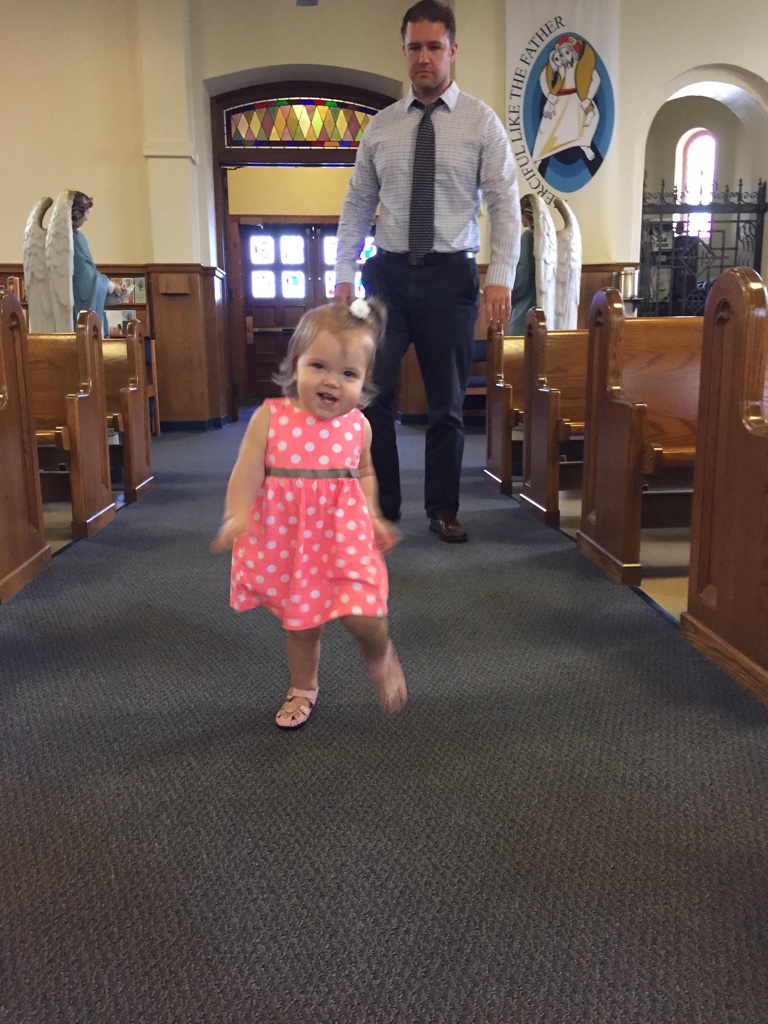 Sarah, Grandma Rita, and our sweet Godson Tommy who added a little noisiness and humor to the ceremony! (Because of my Godmother duties, I really didn’t get a chance to take any other pictures. I’m hoping some will make their way to me over the next few days, though.) 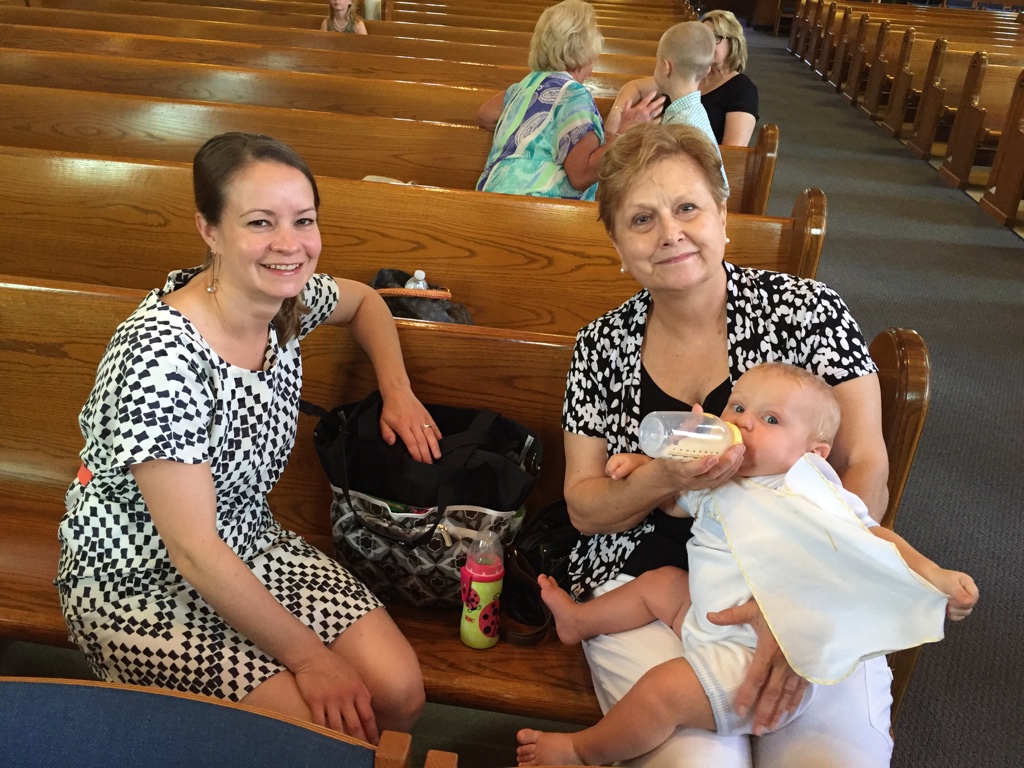 The afterparty was a pool party! Lucy enjoyed swimming with daddy. I enjoyed the ten minute break to eat a delicious cookie. 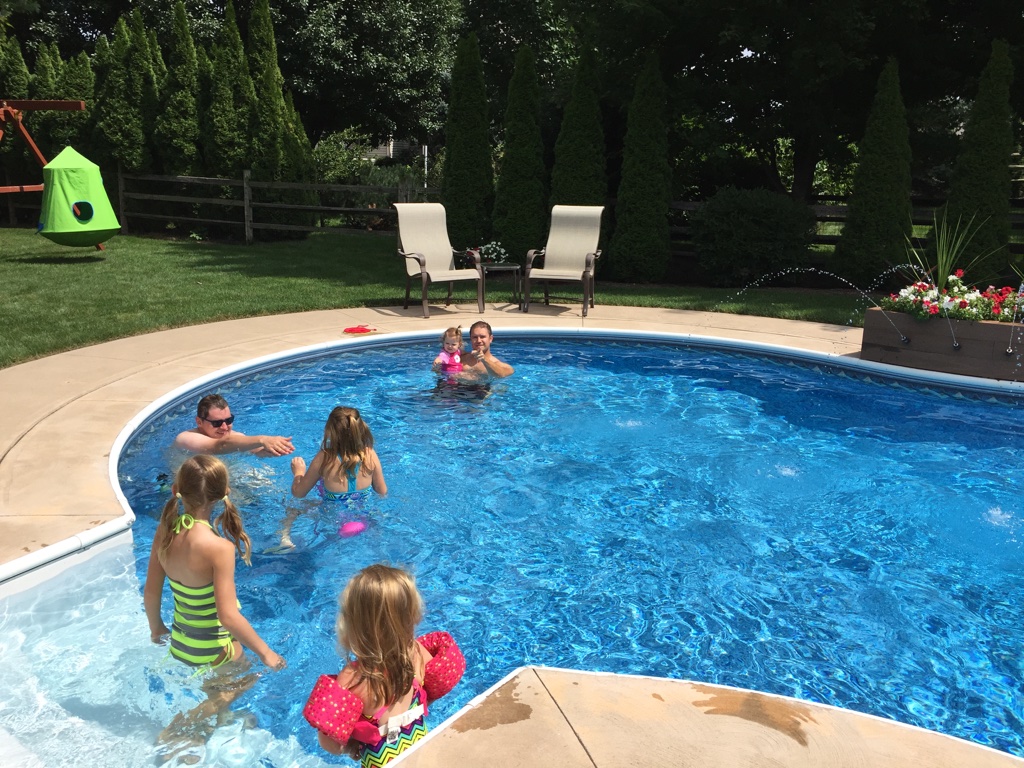 Lucy fell asleep before we even got out of their subdivision. We had an hour drive home, and she slept the entire way. When we got home her fever was 103.5, and she was laying her head in Matty’s lap so we gave her some Tylenol and she slept for almost two more hours! 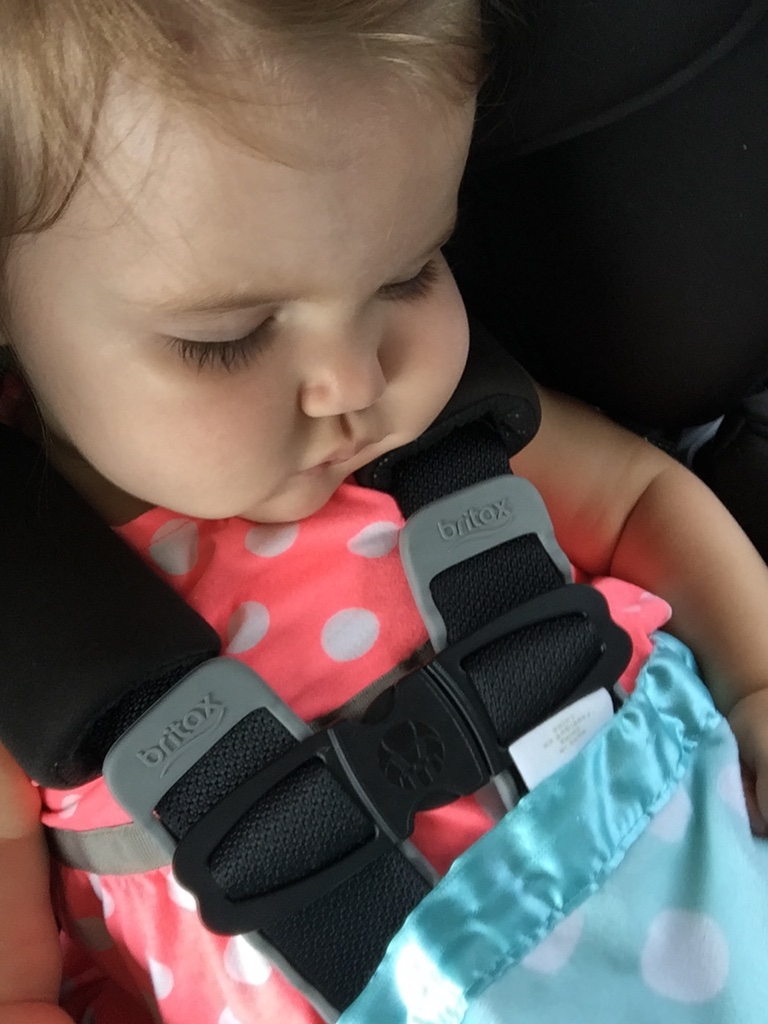 Lucy slept for 13 hours straight Saturday night. Matty and I slept in a bit on Sunday, showered, cleaned our bathroom, did some laundry, and then made ourselves breakfast. At 9:30 we just didn’t know what to do with ourselves anymore, so we went in to check on Lucy. She woke up pretty happy and we are hoping the worst is over. She had just a low (100.8) fever, so we’re hoping this is the end. If there’s any glimpse of a fever Monday morning, she’s heading straight to the doctor.
We took advantage of the beautiful, cool, low humidity morning to walk the dogs and play in the park. 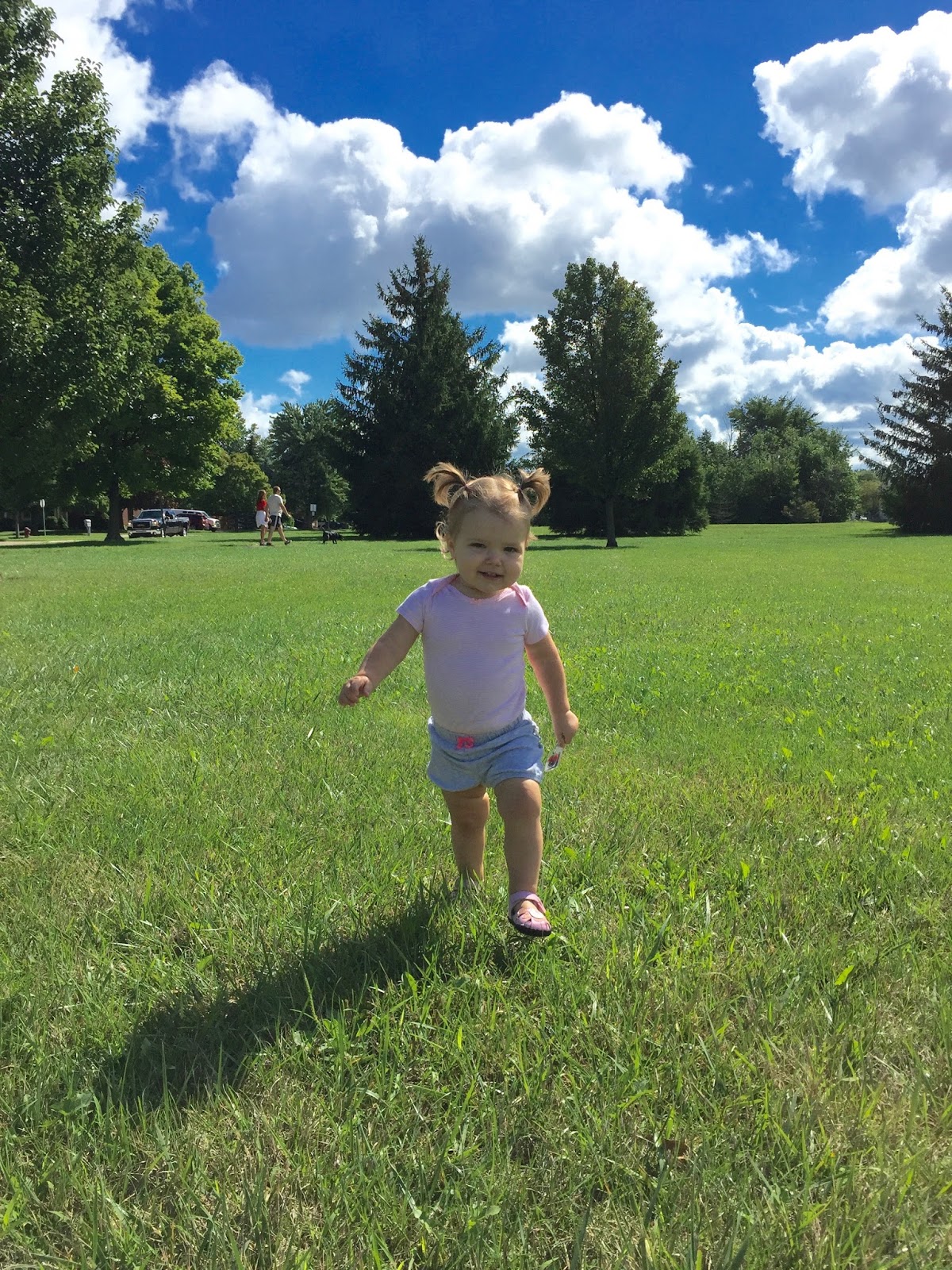 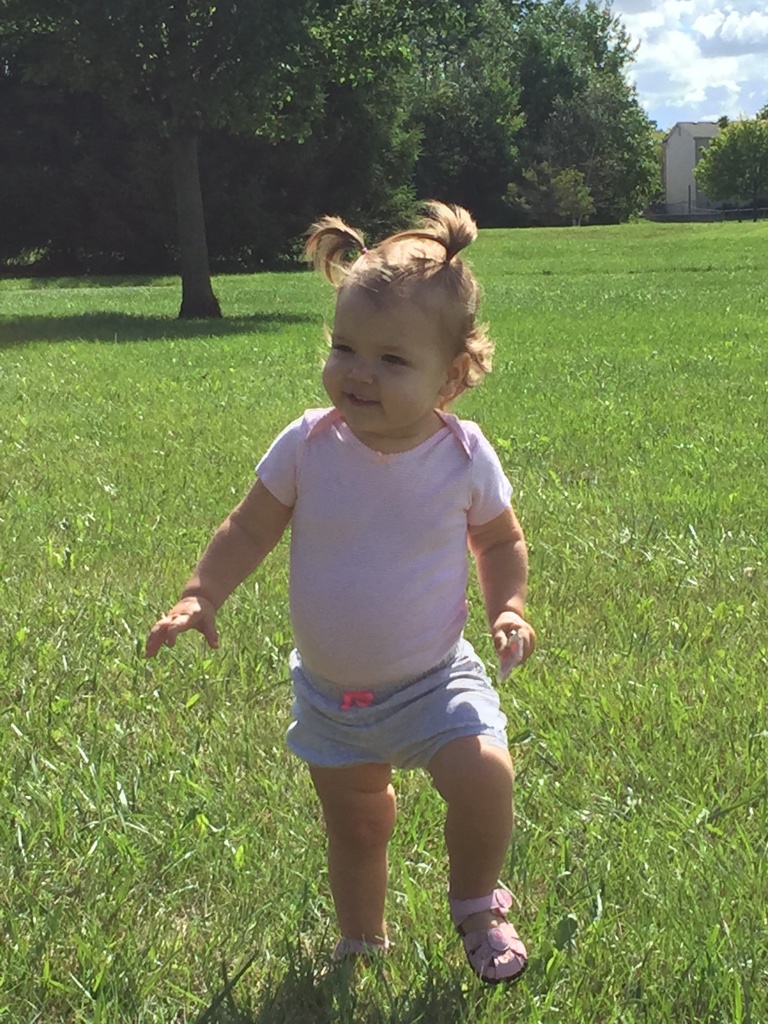 Then we went for a little drive. We stopped at Subway to pick up some lunch and then had a picnic. Lucy played the drums on the booth with her Veggie Straw while we ordered our food. 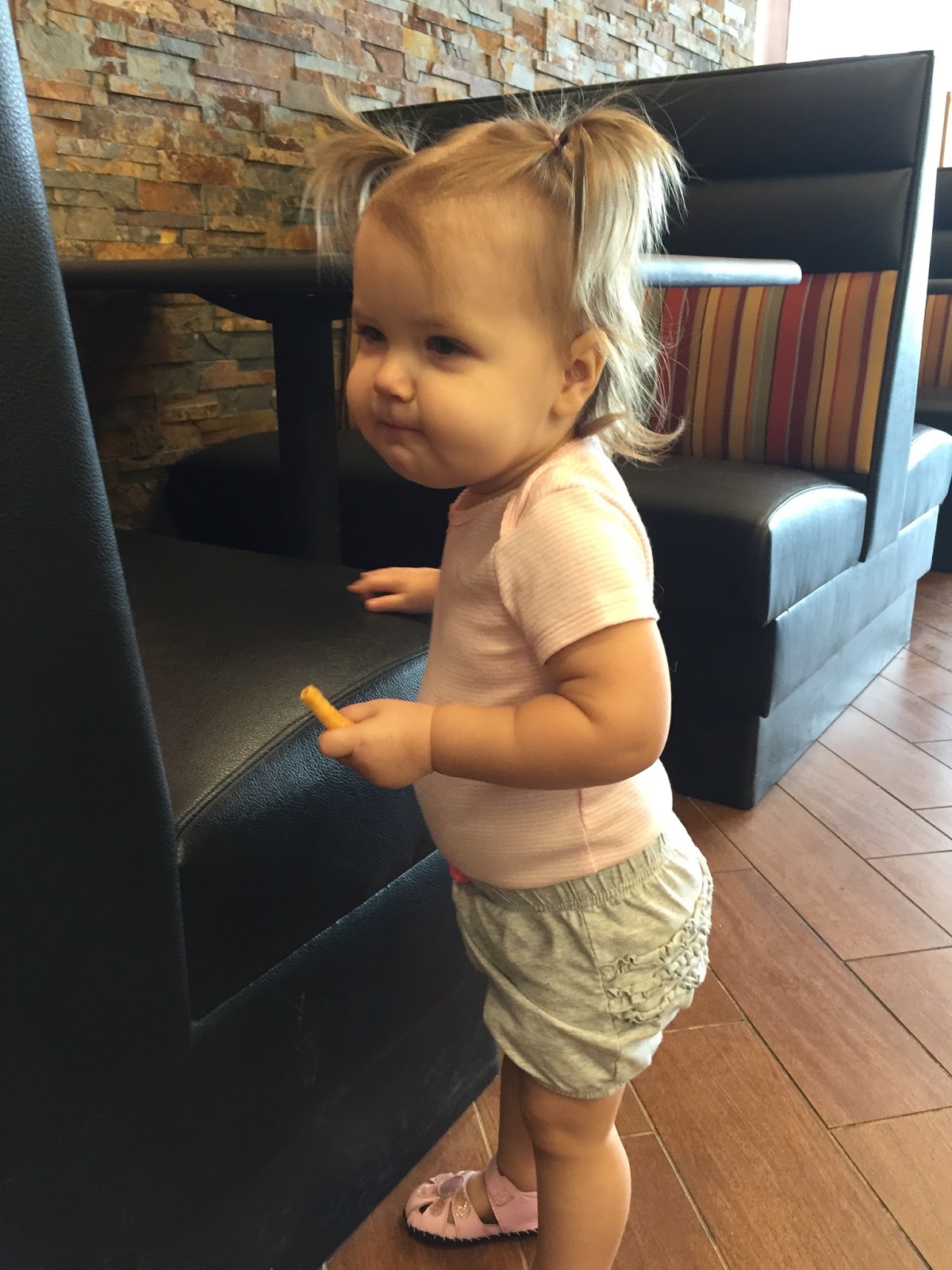 It’s important to stay hydrated when you have a fever. 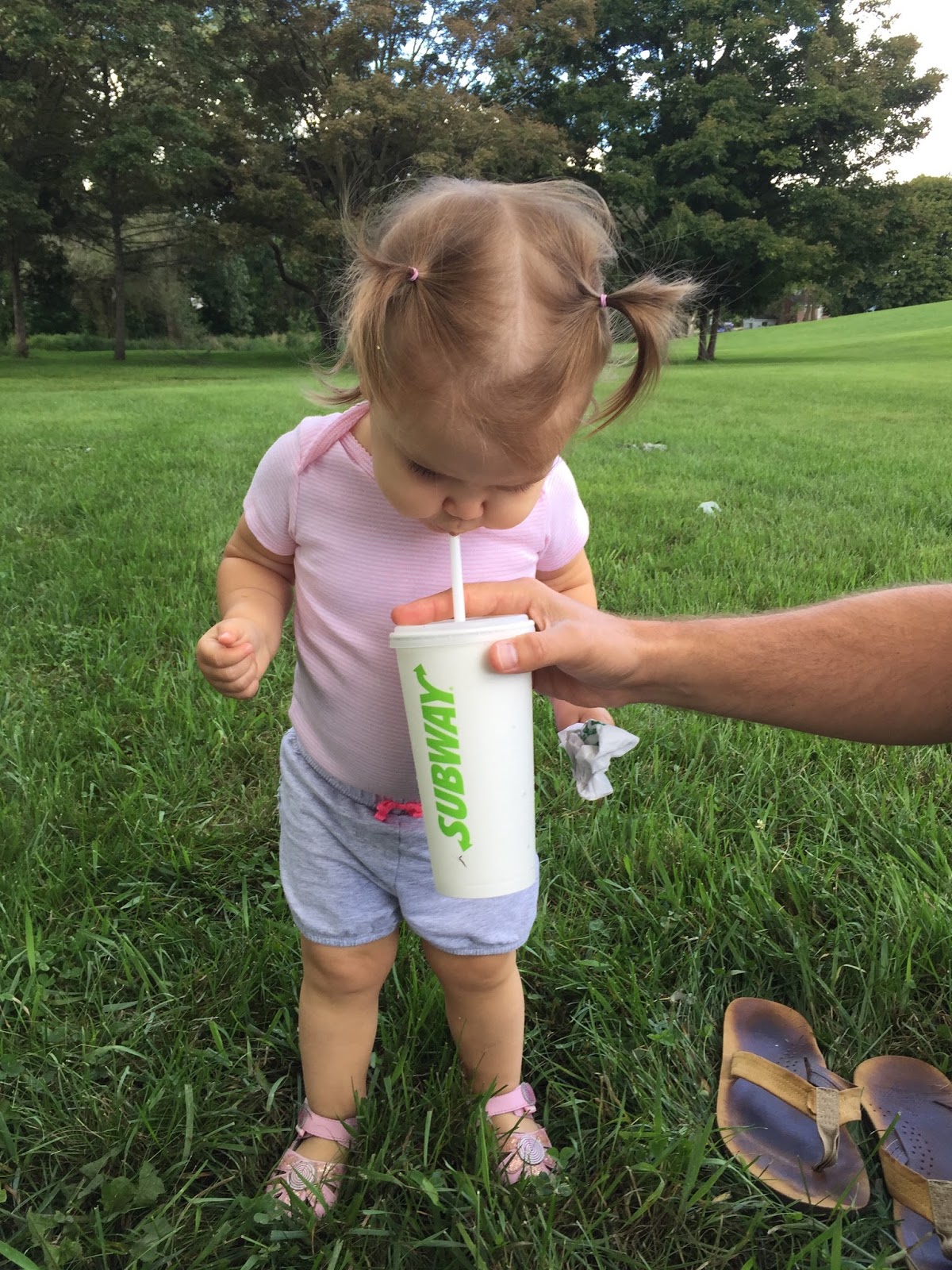 Lucy does a great job of making sure everyone stays clean. 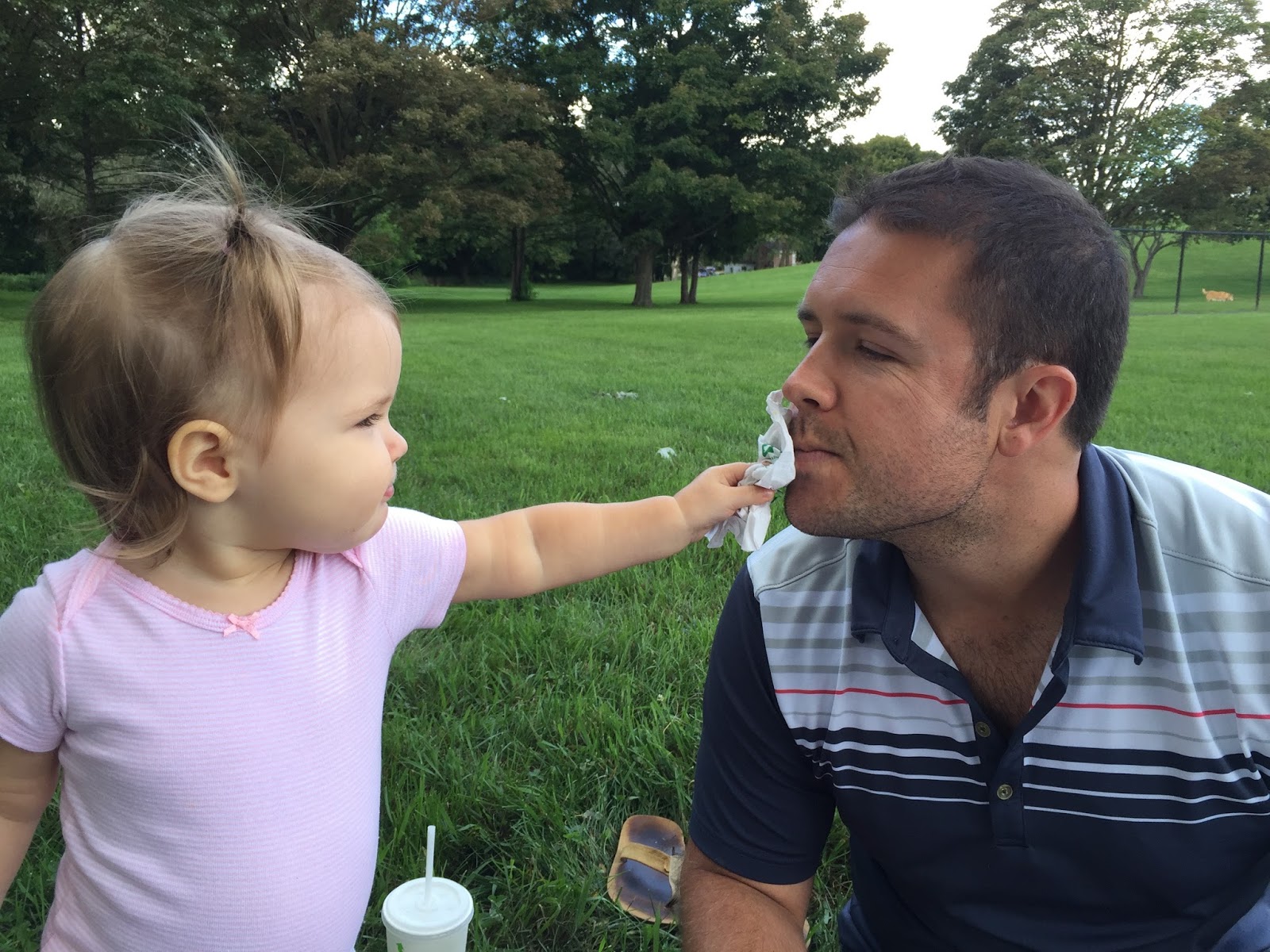 For fun, we stopped in a subdivision that had a model home open just to check things out. In this picture, Lucy is either telling us that she wishes we had more carpet in our house . . . or that she’s ready for a nap. This was her ten minutes later, so I’m thinking she was ready for a nap! 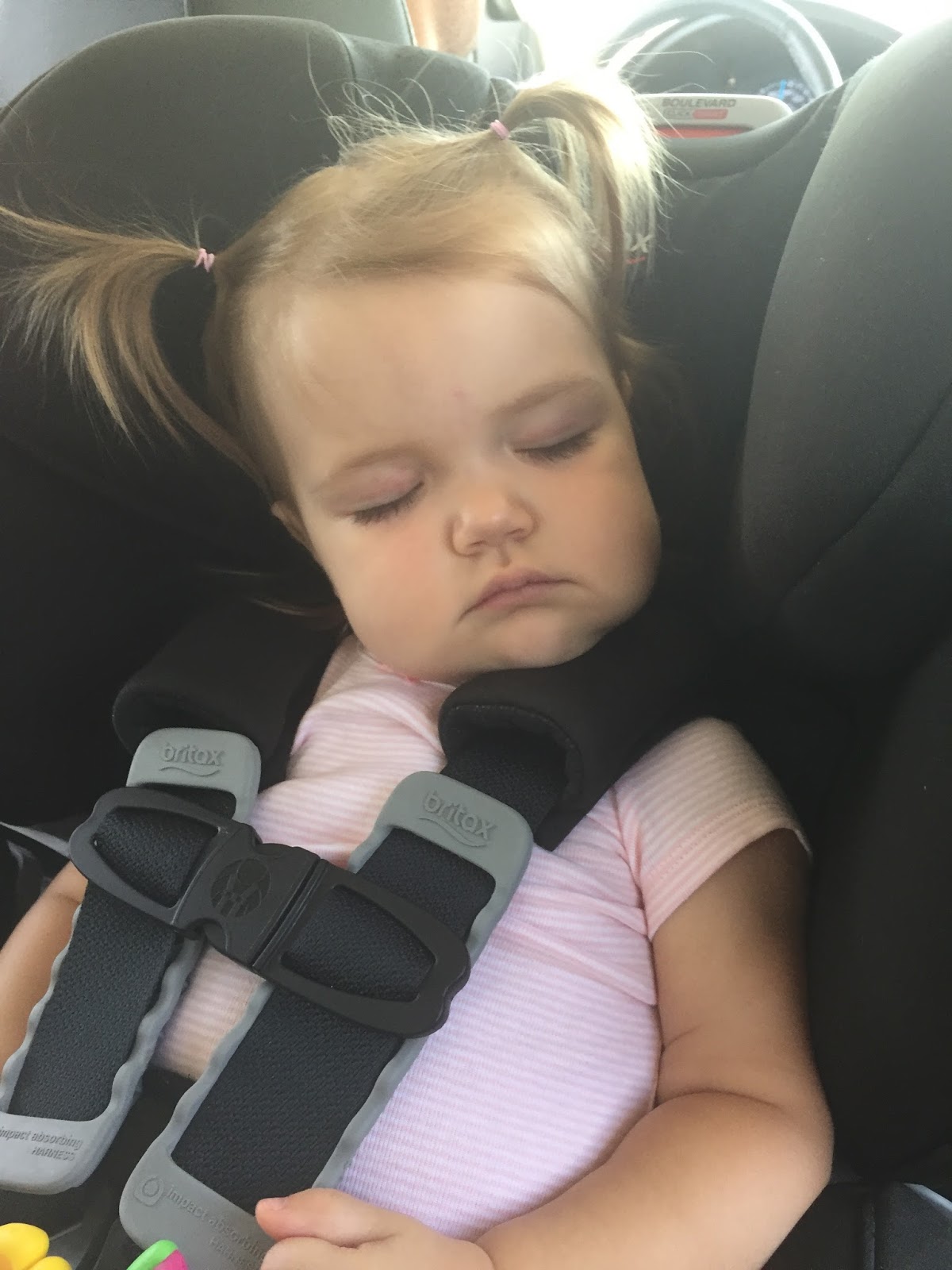 That’s about it. This was probably the busiest four days we’ve had in a long time, and it was a bummer that Lucy couldn’t enjoy everything because she was so sick. I’m looking forward to a better week with a healthy baby . . . and also a date night on Monday . . . and a Moms Night Out on Wednesday! Things are looking good for the week ahead!!
XOXO