Life lately has pretty much been business as usual over here. Cuteness, cuteness, and more cuteness!
Lucy found our wedding DVD earlier in the week (and by “found” I mean she saw it on top of the bookshelf in the playroom where it has been sitting since our ten year anniversary back in June), so I decided to pop it in and see what she thought. She was captivated! We sat there for about fifteen minutes until she got antsy. Which is funny because that’s approximately how long I lasted at the actual ceremony before I got antsy as well. #bringonthecake #andthehoneymoon 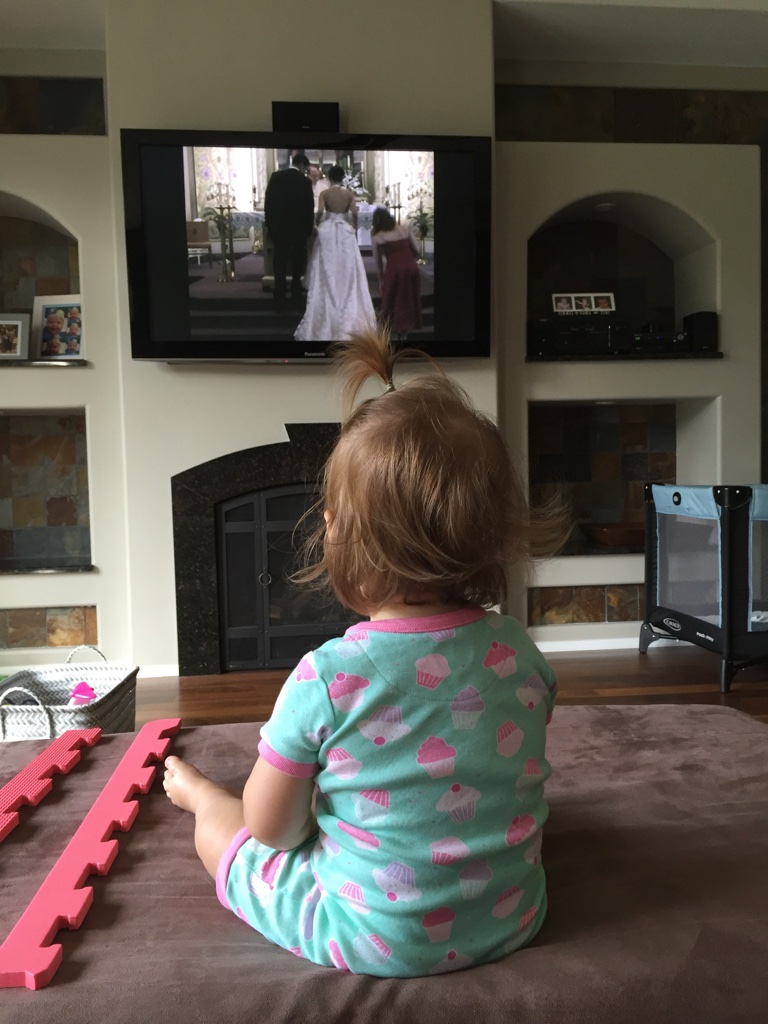 We had lunch with Grandma Ri on Monday, and Lucy ate like a champ. 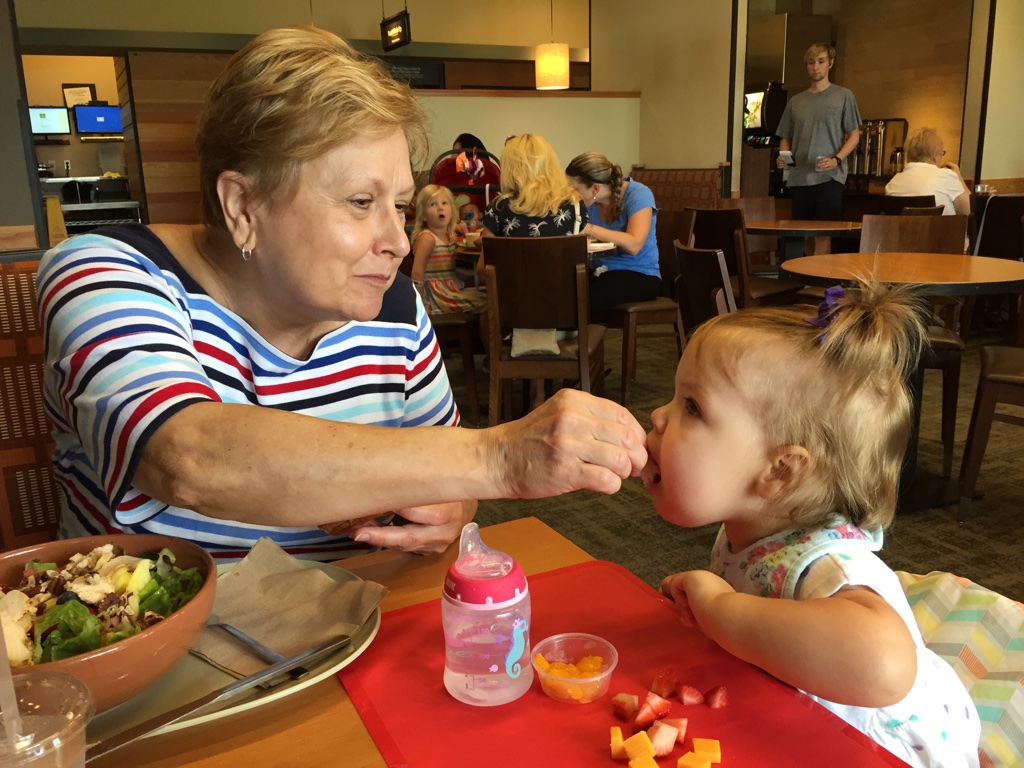 Despite all the food on her placemat, Lucy needed to be holding all the bread at the table in order to be happy. 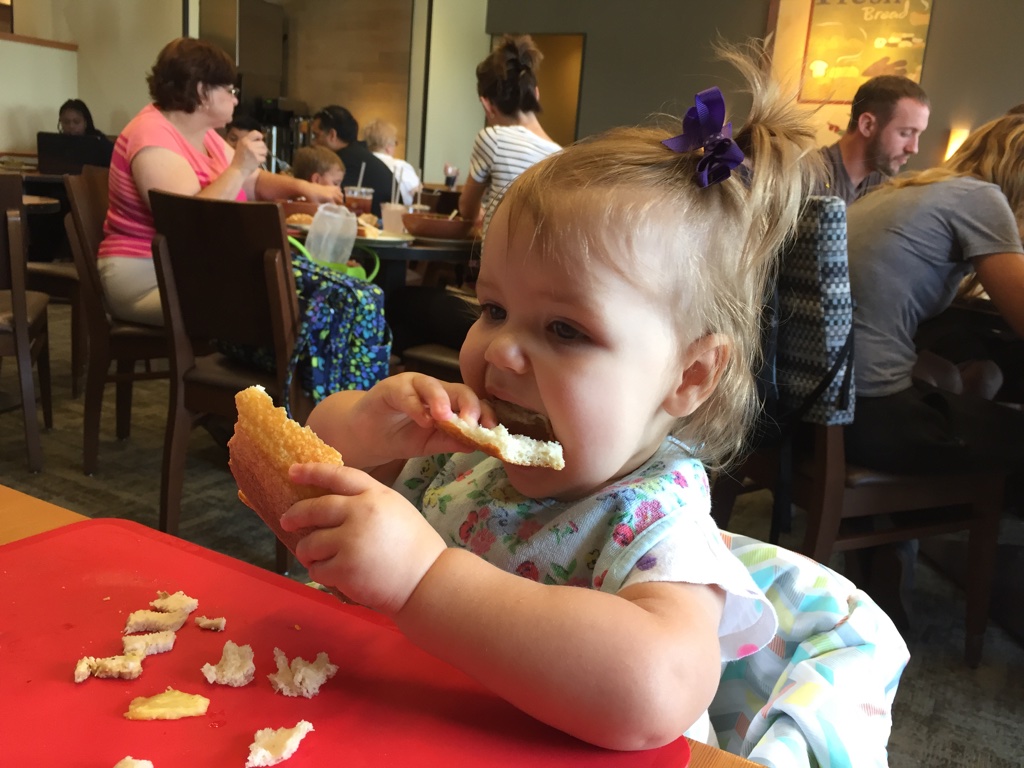 The love of carbs has been transferred from mama to daughter. 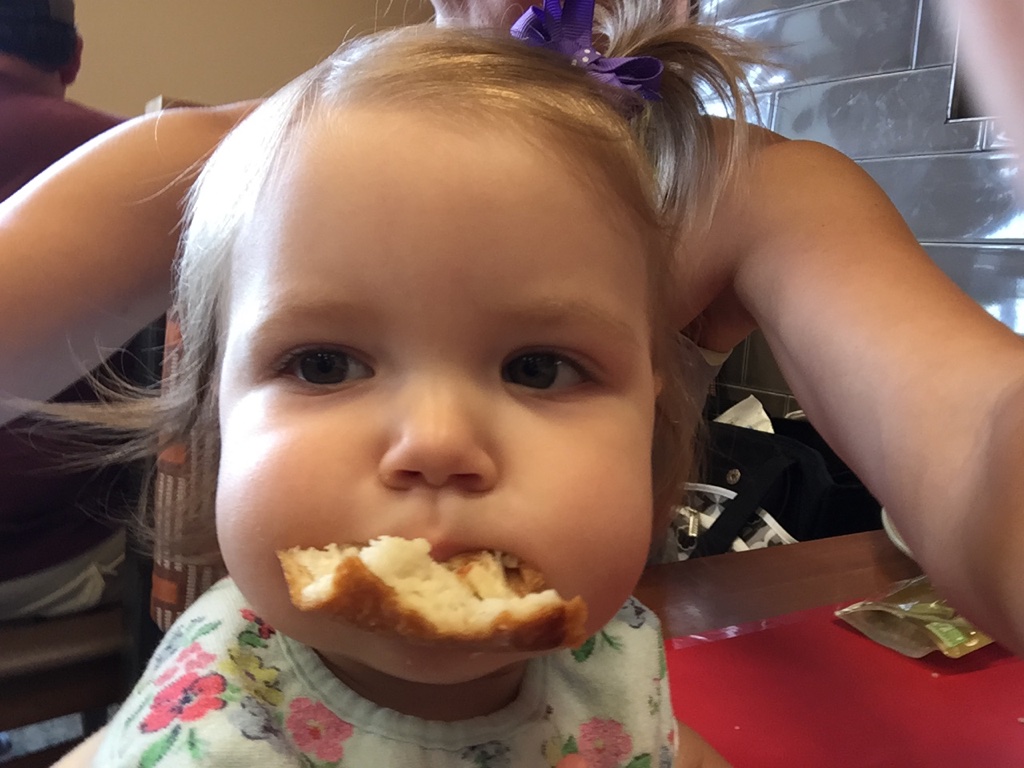 After lunch we went to check out Grandma Ri’s new carpet in her basement. This is definitely the biggest carpeted space Lucy has had to run around on, and it was wonderful! 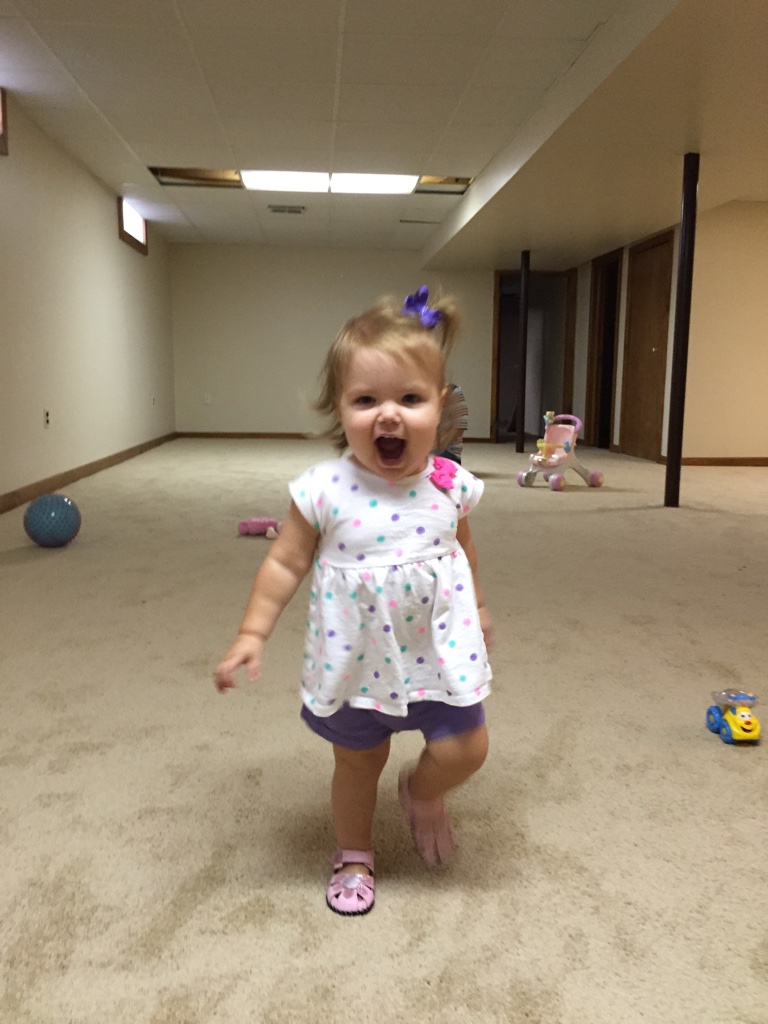 I’ve been working hard on giving Lucy the chance to follow me into other rooms rather than picking her up and carrying her where I need to be. When we got home from Grandma Ri’s, I told Lucy it was time for a nap and asked her to follow me into her bedroom. She started following me, but then arrived about ten seconds after I thought she should have. After I put her down for a nap, I discovered the reason why. Someone took a detour to the water bowl! This has been my biggest struggle lately! 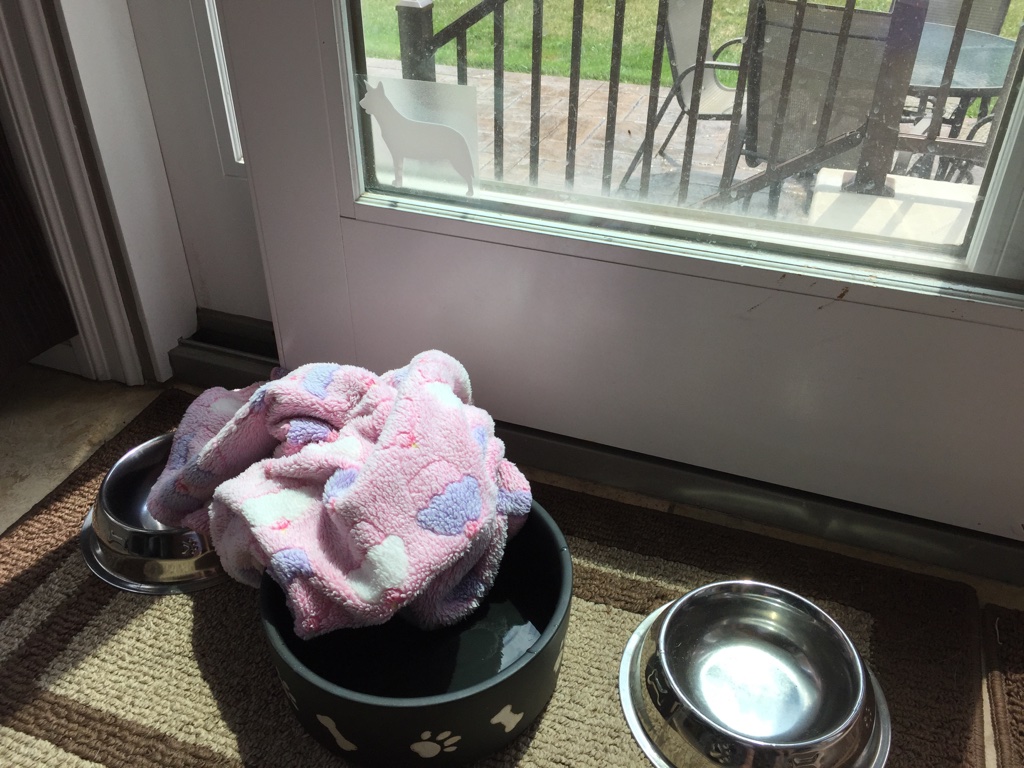 All of that running around in the basement tired Lucy right out! 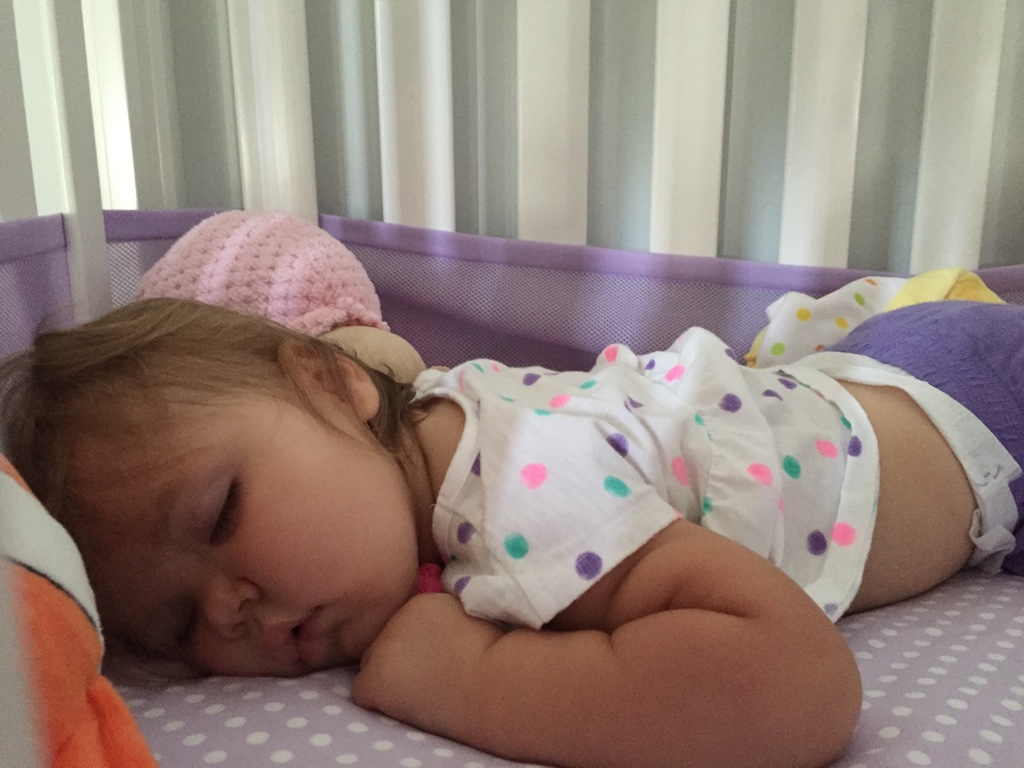 This is how Sydney naps. She’s nothing if not ladylike! 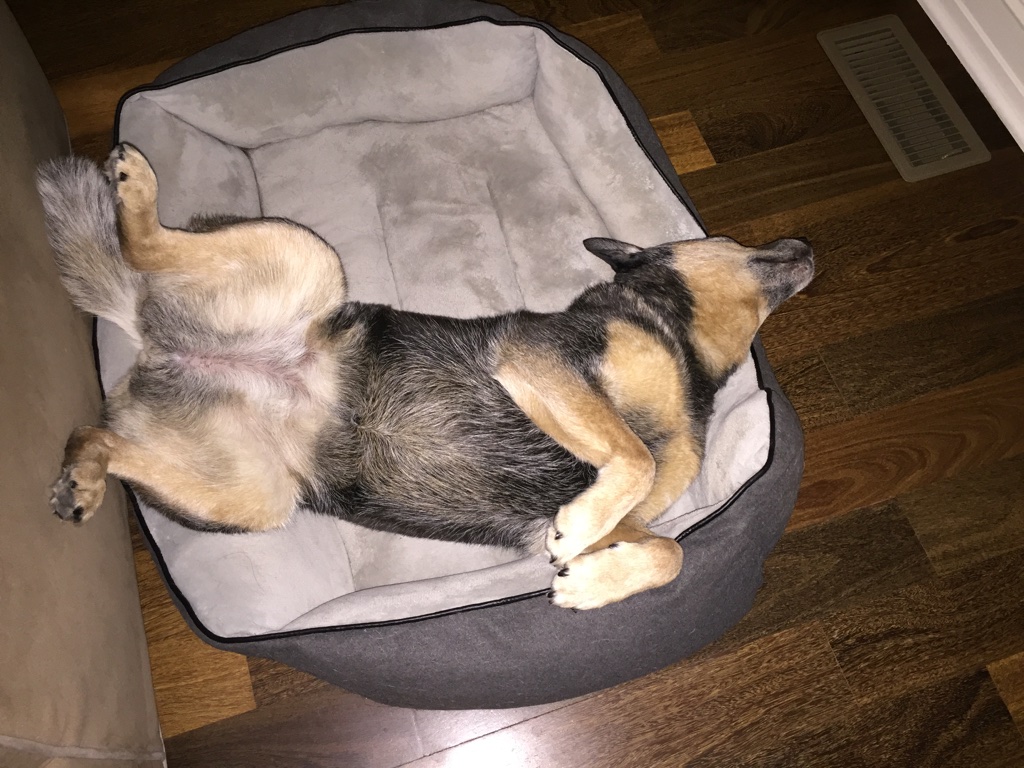 We had friends over Tuesday evening, and Lucy got to stay up about half an hour past her bedtime! #partyanimal She had a great time running around the yard and playing in her pool. Somehow she found herself on the wrong side of the dreaded hose line. She refused to cross it. She’ll make a good picketer someday. 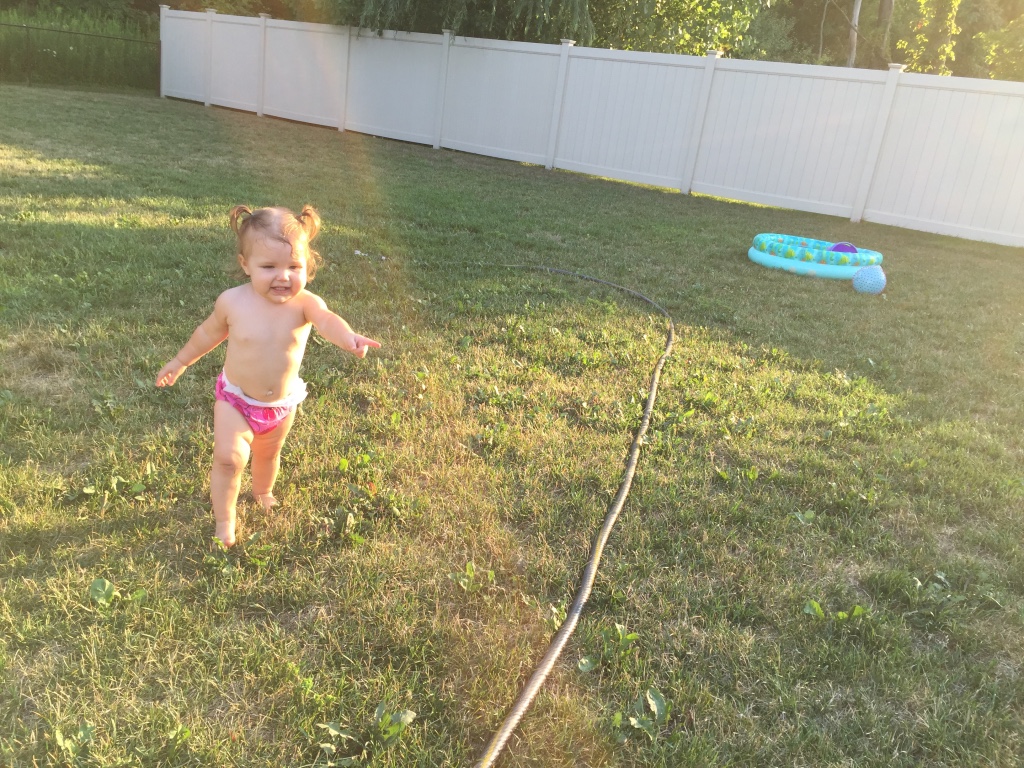 Their daily morning stare down. If I let her, Lucy would crawl right in. 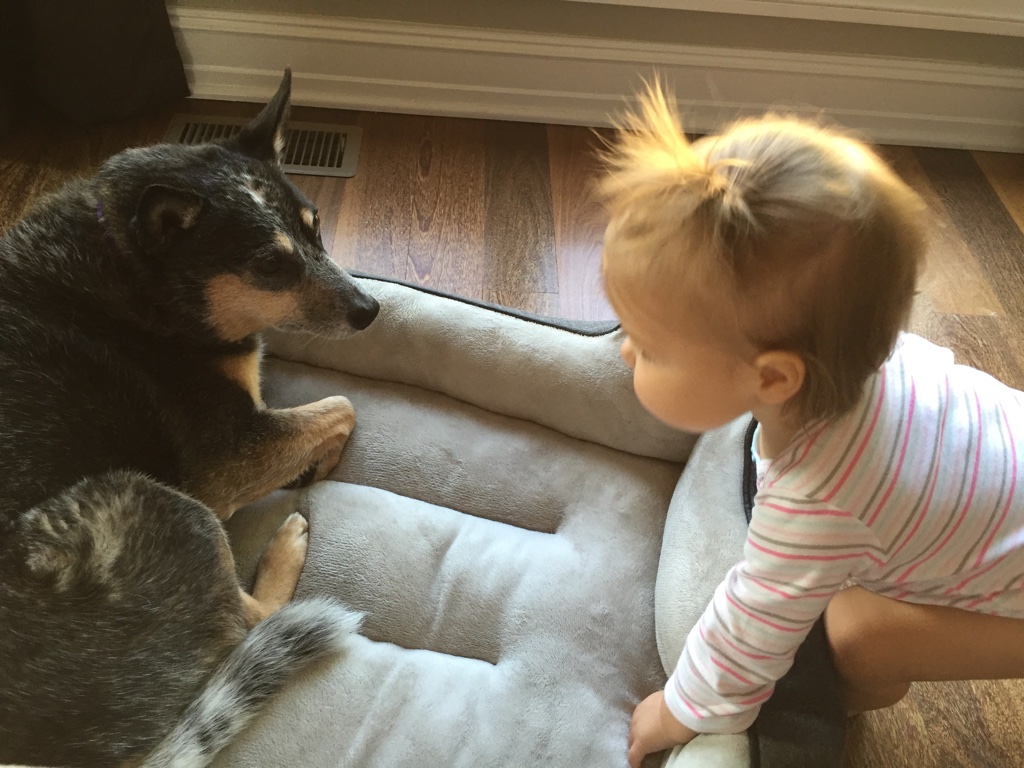 Oma and Andy made blueberry muffins the other day and sent some our way. Lucy was really enjoying hers for breakfast so I thought I’d take a picture, and happened to click at the exact second that Lucy sneezed! #sneezemuffin 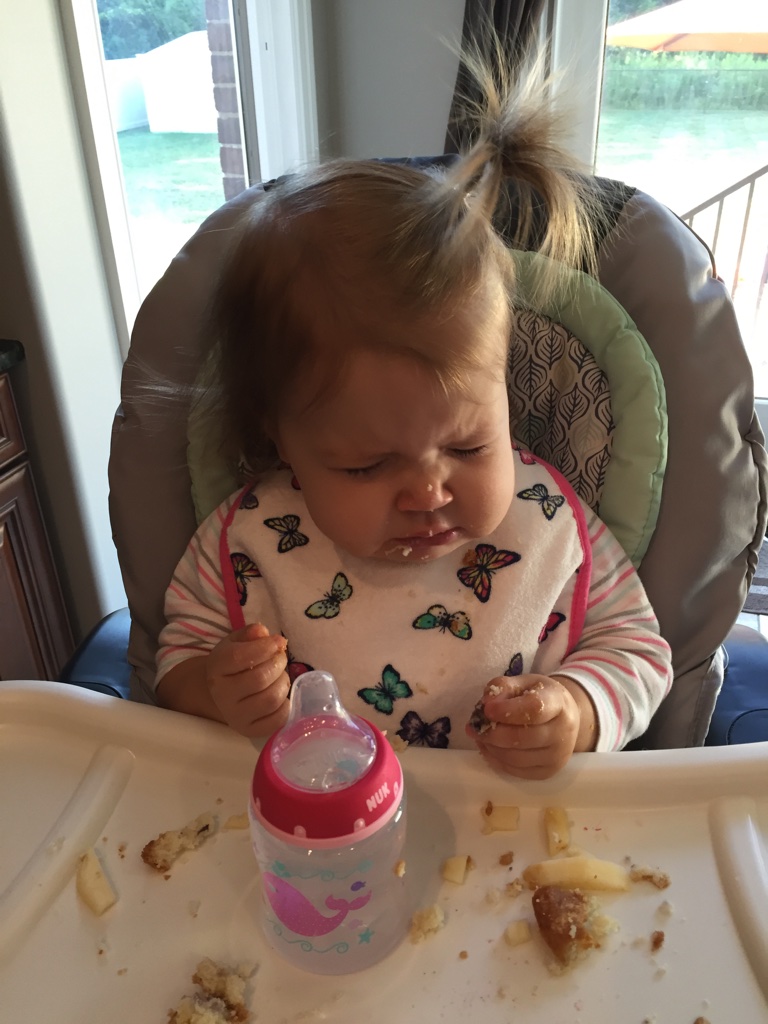 We were minus four babies at Music in the Park, but Lucy and I still had a good time sweating bopping to the music. 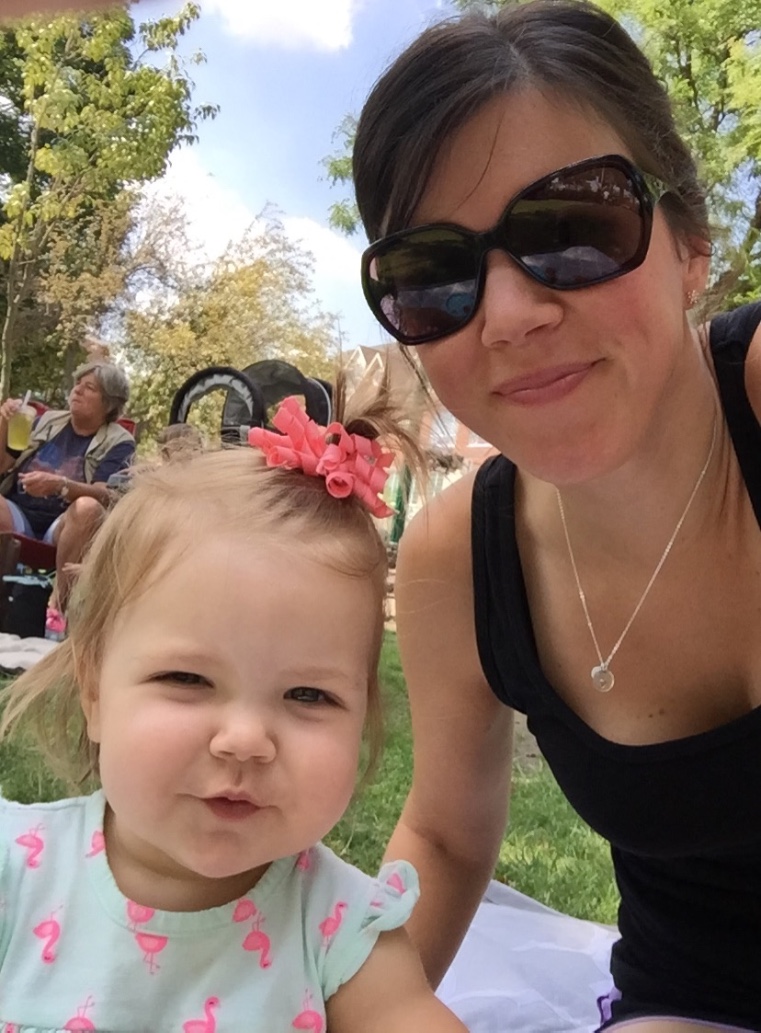 And reading books and playing with spoons while wearing a fireman hat. 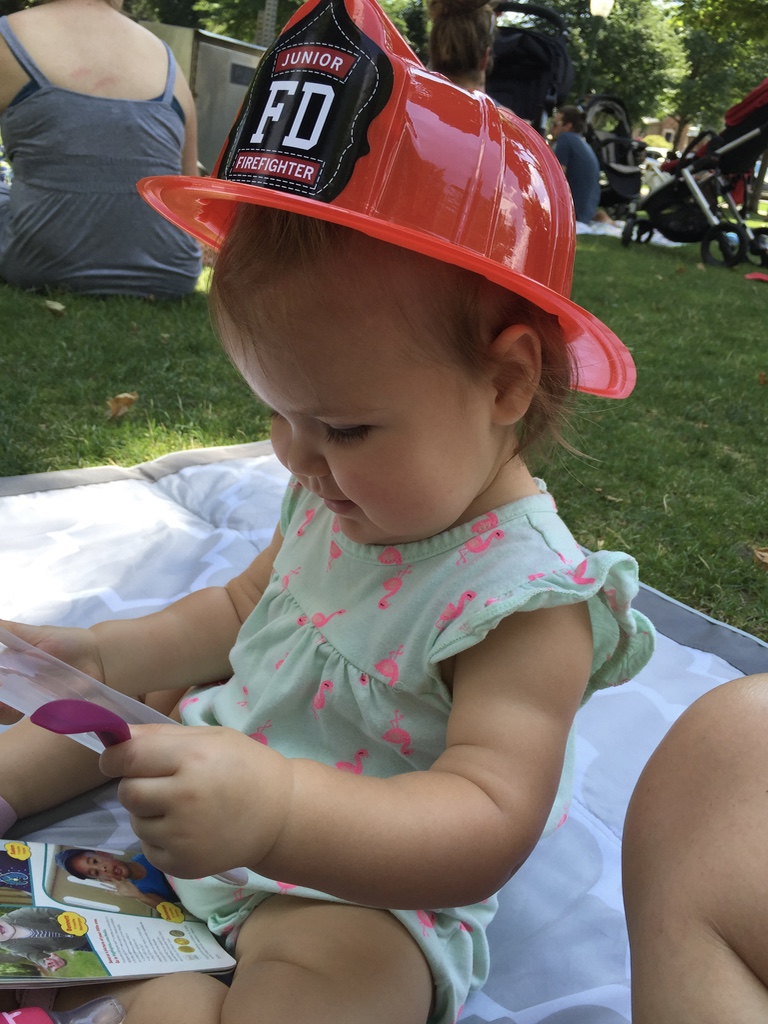 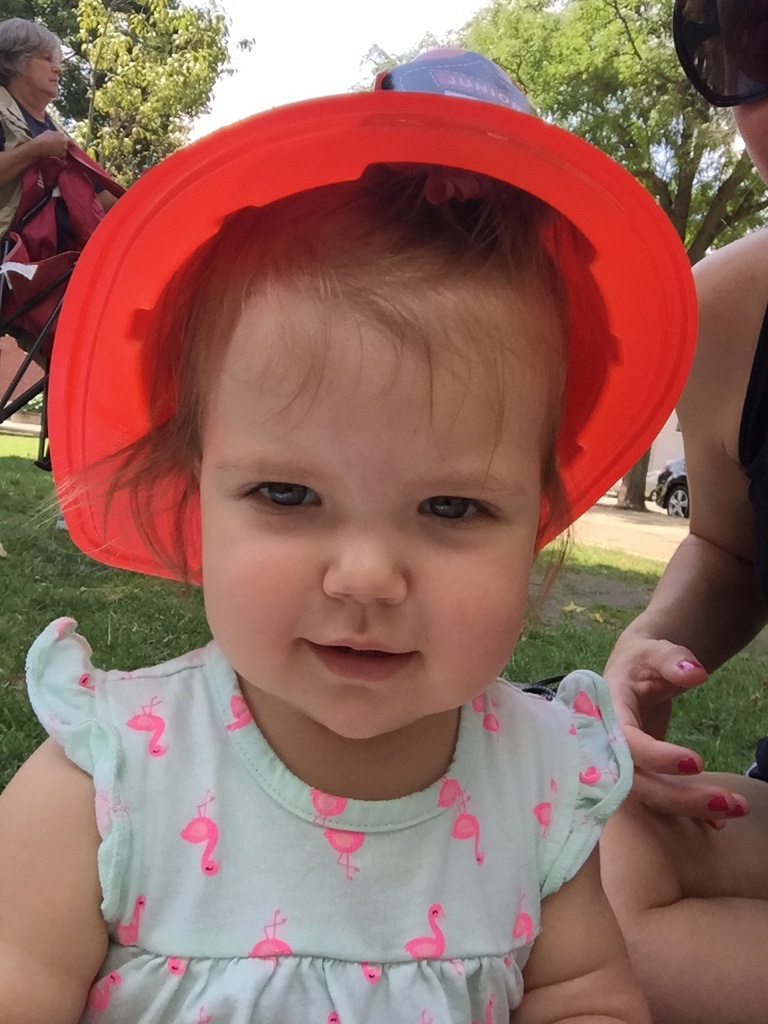 Well, we did it . . . we bought Lucy an iPad.  J to the K! This is my old, slooow, iPad that I use with my tutoring students. Lucy has shown GREAT interest in our phones and electronic devices, but we never let her touch them. I decided to download a few apps for her that involve matching pictures and shapes. We tried it with her for the first time today, and she loved it! She’s getting the hang of swiping, and even got a few matches on her own. Next, we’ll work on the crying when we say “All Done.” 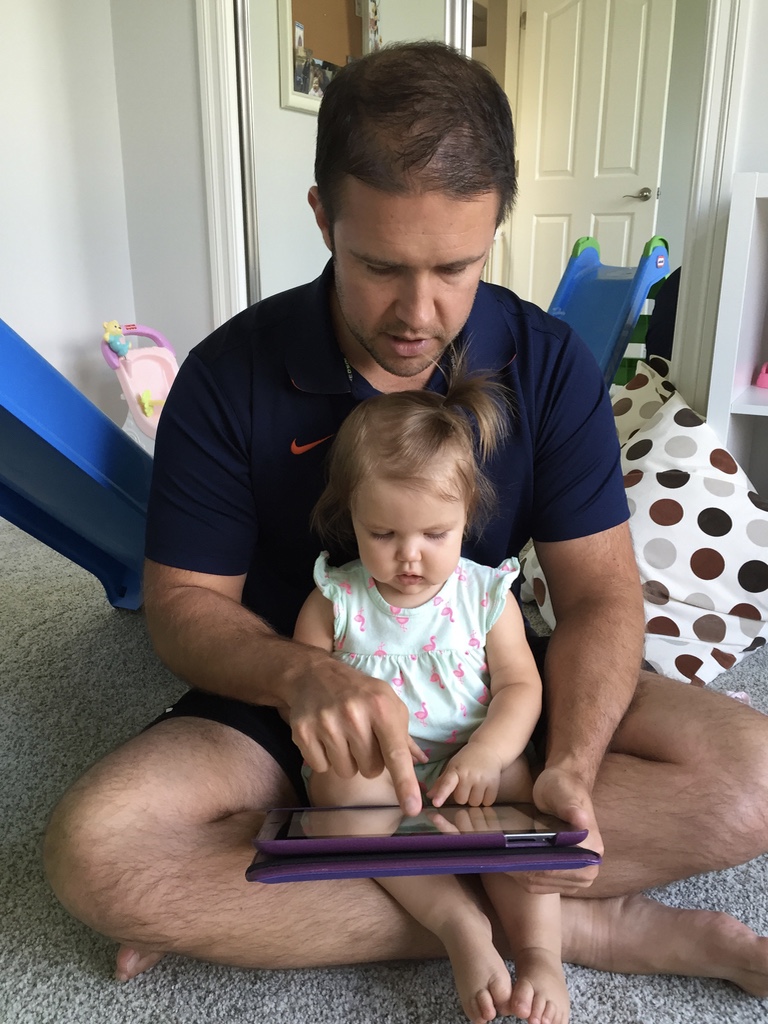 And I’ll leave you with this. Truer words were never spoken. 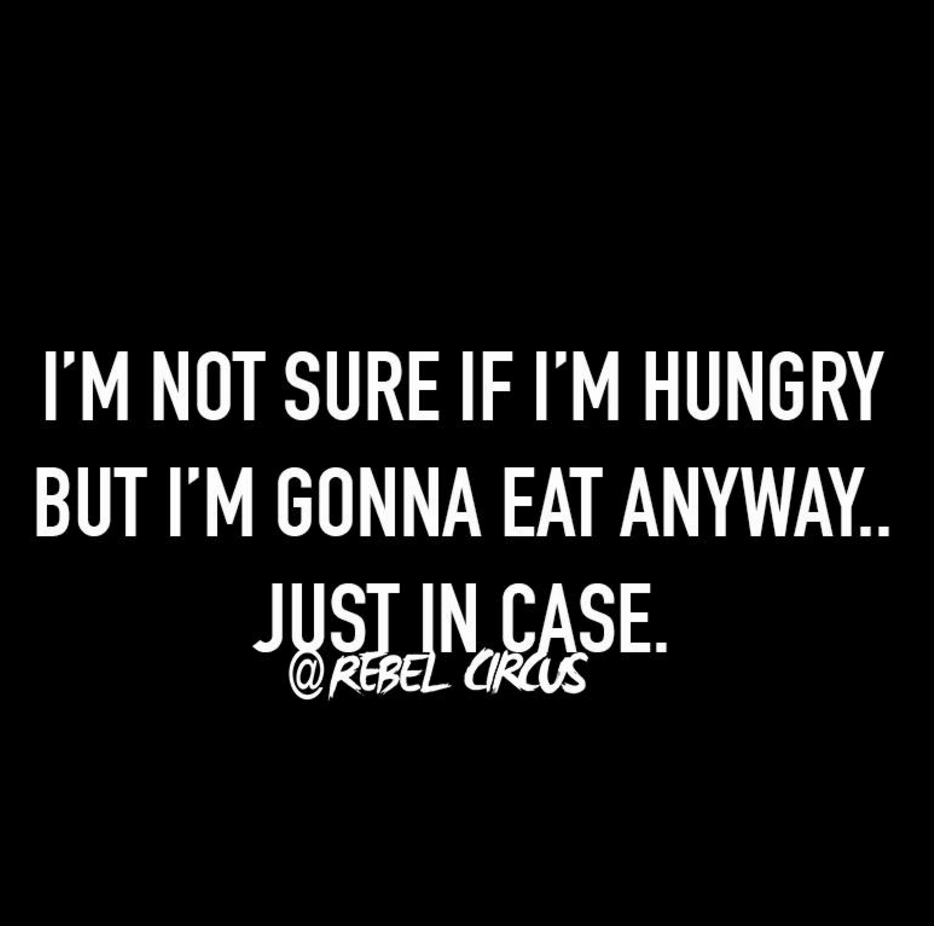 Have a great weekend!
XOXO