As weekends go, ours ended up being not that bad but it certainly got off to a VERY rough start. If you’ll recall, we got back from our vacation last Tuesday where Lucy was under the weather for most of the time. Wednesday was spent at the doctor taking care of her Roseola/diaper area infection issues. Thursday we had a quick little morning play date and then headed home for lunch. As we were heading home, I felt a little nauseous and figured it was just because I hadn’t eaten anything except a small breakfast. However, as I was feeding Lucy lunch it quickly became clear to me that hunger was not the issue. Every time I had to cut up her food or saw her put something in her mouth my stomach rolled over. Thursday is Matty’s golf night, so my mom was heading over in the afternoon to hang out with us. I had about two hours until her arrival and prayed that Lucy would go down easily for her nap (she didn’t). By the time my mom arrived I was running a fever and felt terrible. A stomach virus and all of its effects started hitting me HARD.
Thank goodness for grandmas because both of them came over to help with feeding, playing, bathing, and putting Lucy to bed while I was being miserable in our bedroom. And because she’s not used to other people doing all of that, it sounded like Lucy did not make it easy on them! My SIL had the same thing the week before, and as she so eloquently put it, I haven’t been that up close and personal with the toilet in a long time . . . or ever!
By the time Matty got home from golf around 8:45, things had taken a turn for the worse and it was time for a trip to urgent care. The first half of the trip is a little foggy, but the second half was spent hooked up to an IV and hunkered under several warm blankets but shivering uncontrollably. I’ve had kidney stones, I’ve had a C-section and all the recovery that comes with it, and I’ll take either of those over how I felt Thursday afternoon and night. Thank goodness for a couple of sassy nurses at the St. Joe’s Urgent Care who stayed with us until 11:45, despite the fact that they closed at 10:00. They were so kind and reassuring to me, found Matty some snacks, and one of them expressed the fact that she intended to go get a hot fudge sundae after work. #nofoodtalkwhilesick
I was still down for the count on Friday so Matty stayed home to play Mr. Mom. It made me feel good to hear him say a few times, “How do you do this all day every day?” However, based on this picture that he sent me while I was in bed, he seemed to make the best of things! #wheresherponytail 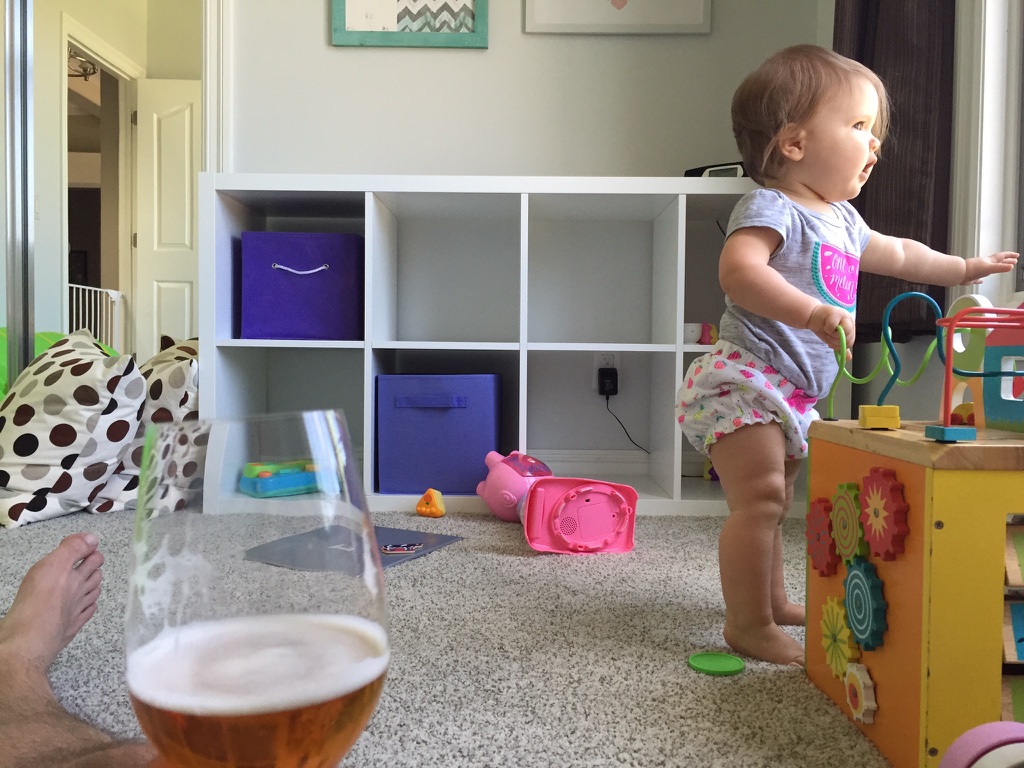 Saturday was a BEAUTIFUL day. I wasn’t nauseated anymore, but still felt tired and my body hurt. However, Matty had gotten a new car and I felt like getting out of the house, so we loaded that sweet baby up and went for a drive. We ended up at Kensington Metro Park for a little picnic. Lucy loved it! 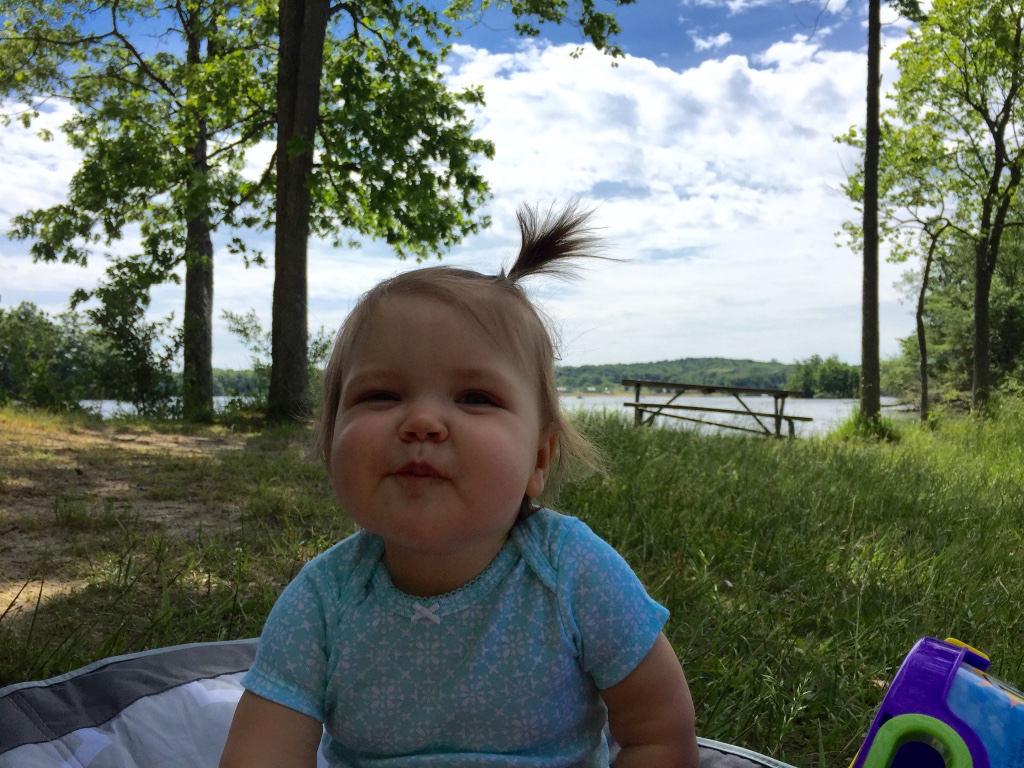 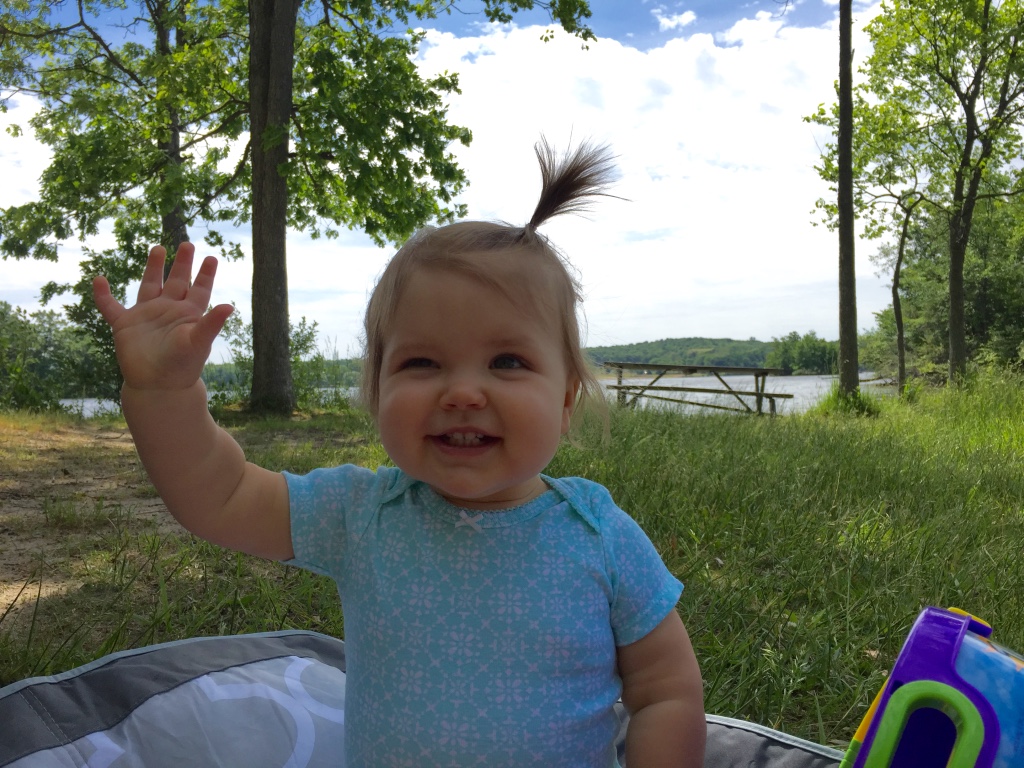 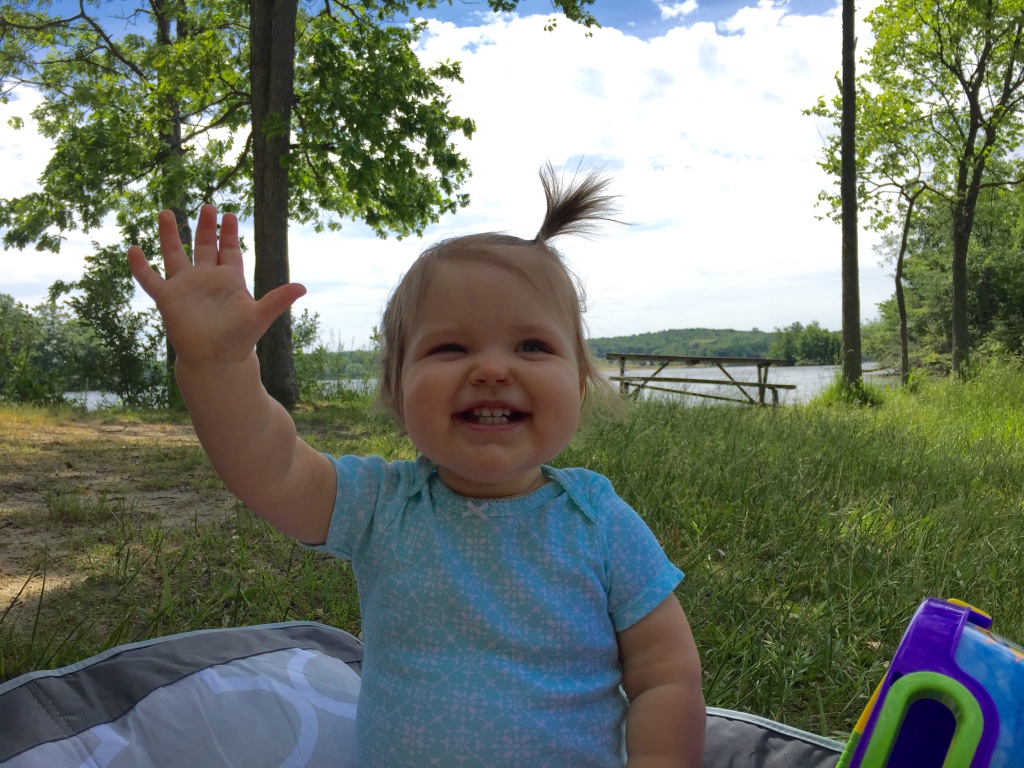 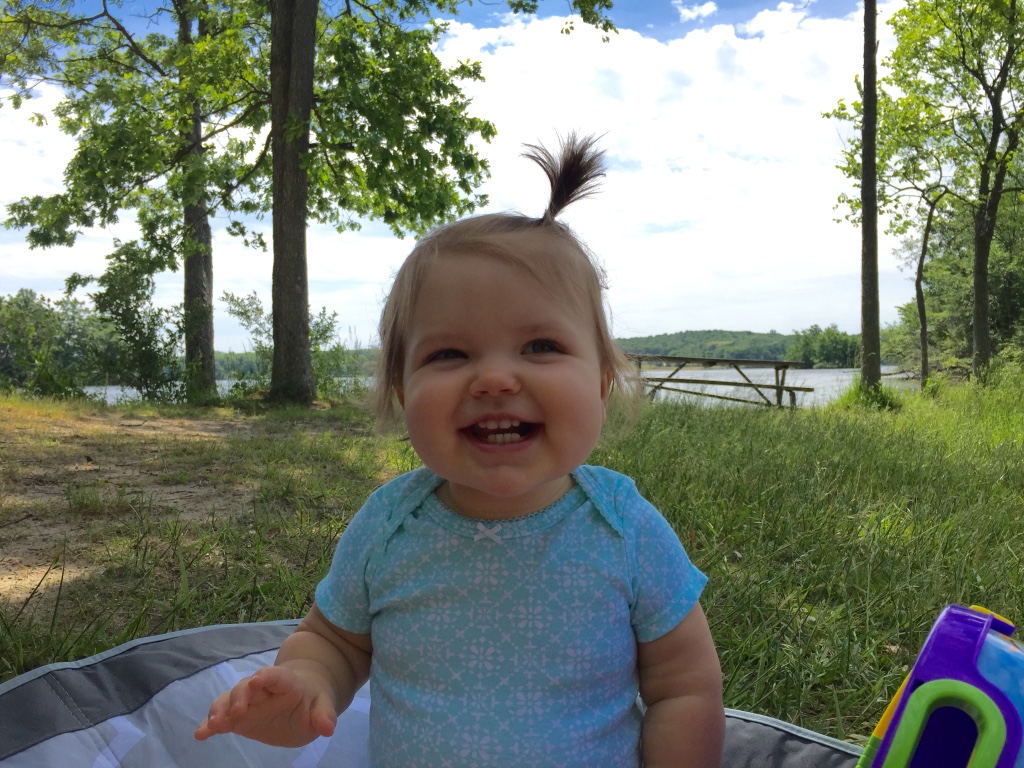 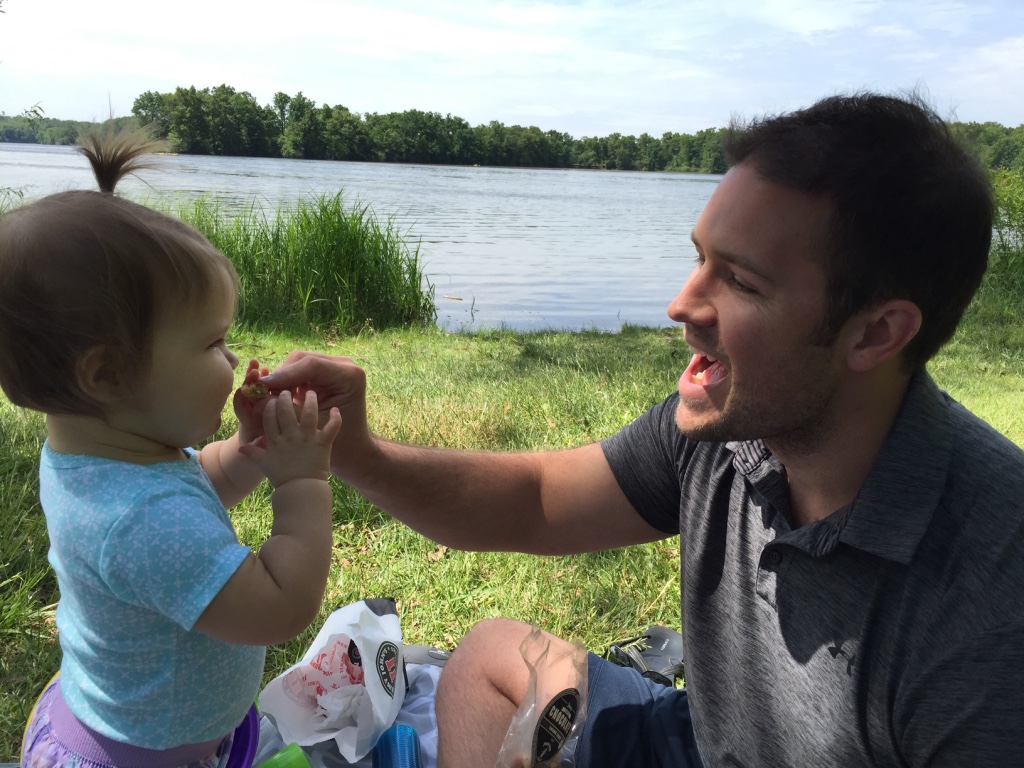 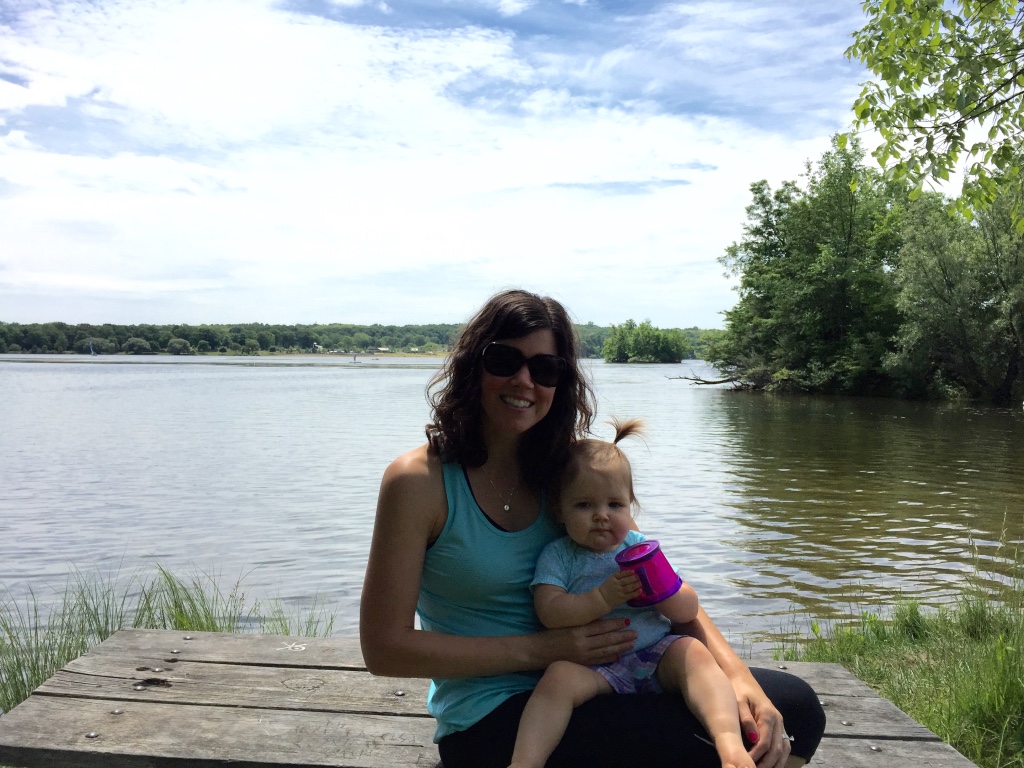 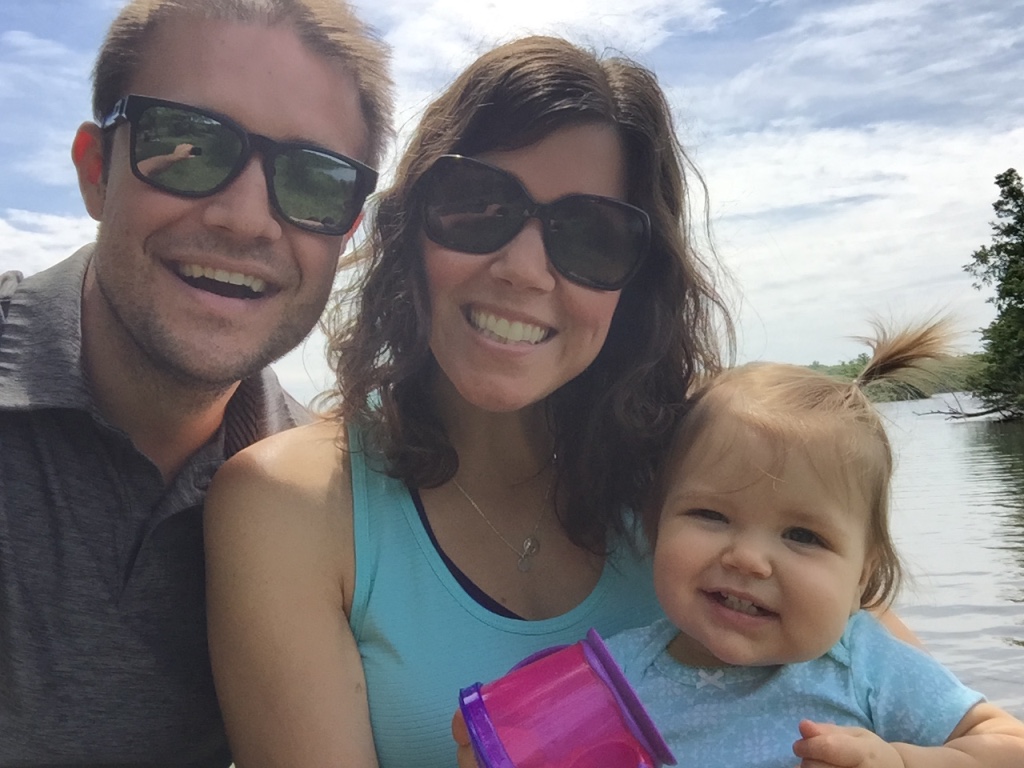 I love how they are staring at each other in this picture. I’m fairly certain Lucy was actually looking at the mirrored lenses on Matty’s sunglasses. 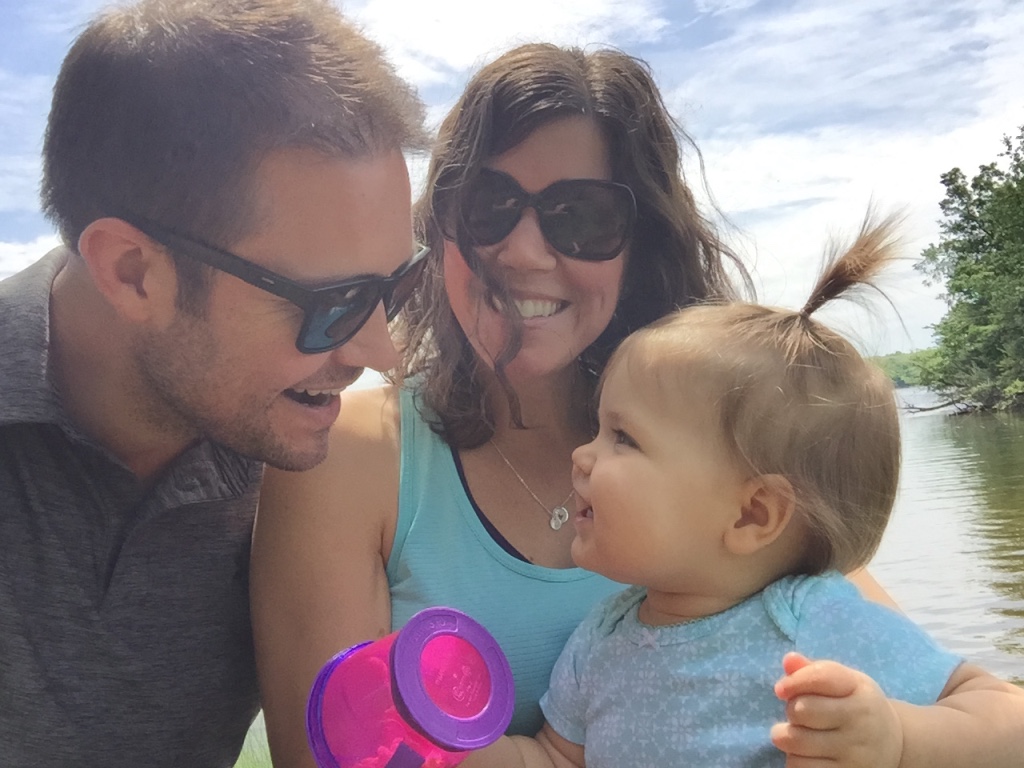 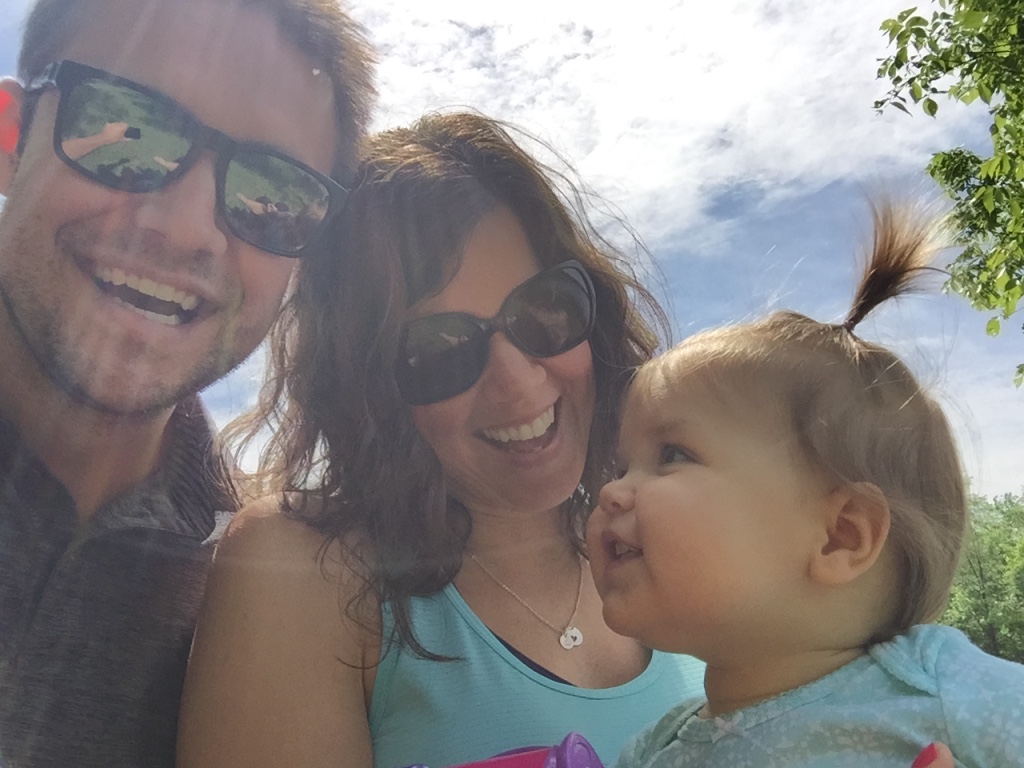 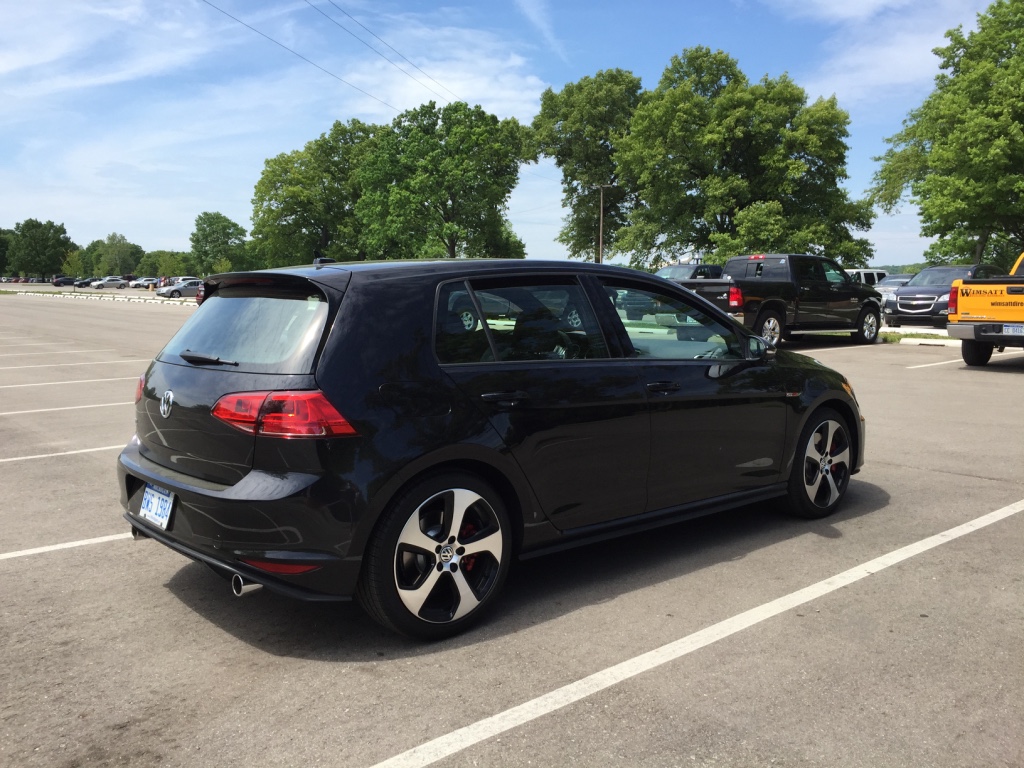 This is the best view from a baby swing ever! I can’t wait to go back when I’m feeling up to exploring more of the park. 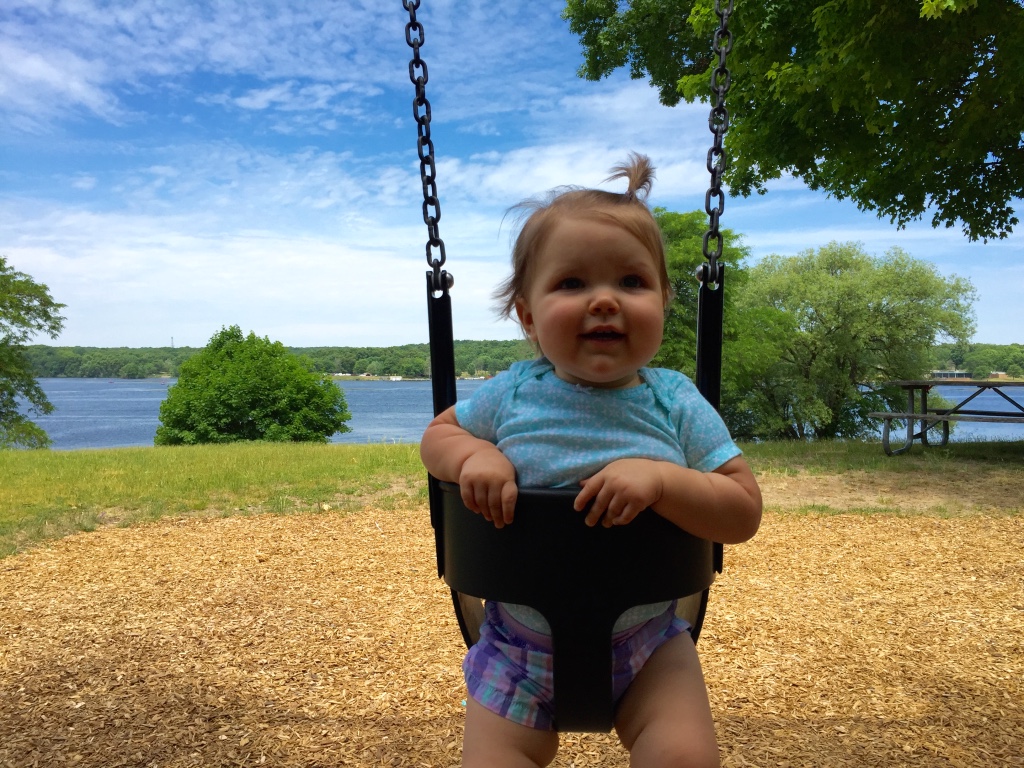 Our little adventure left me tuckered out, so I rested while Matty took care of Lucy for awhile. 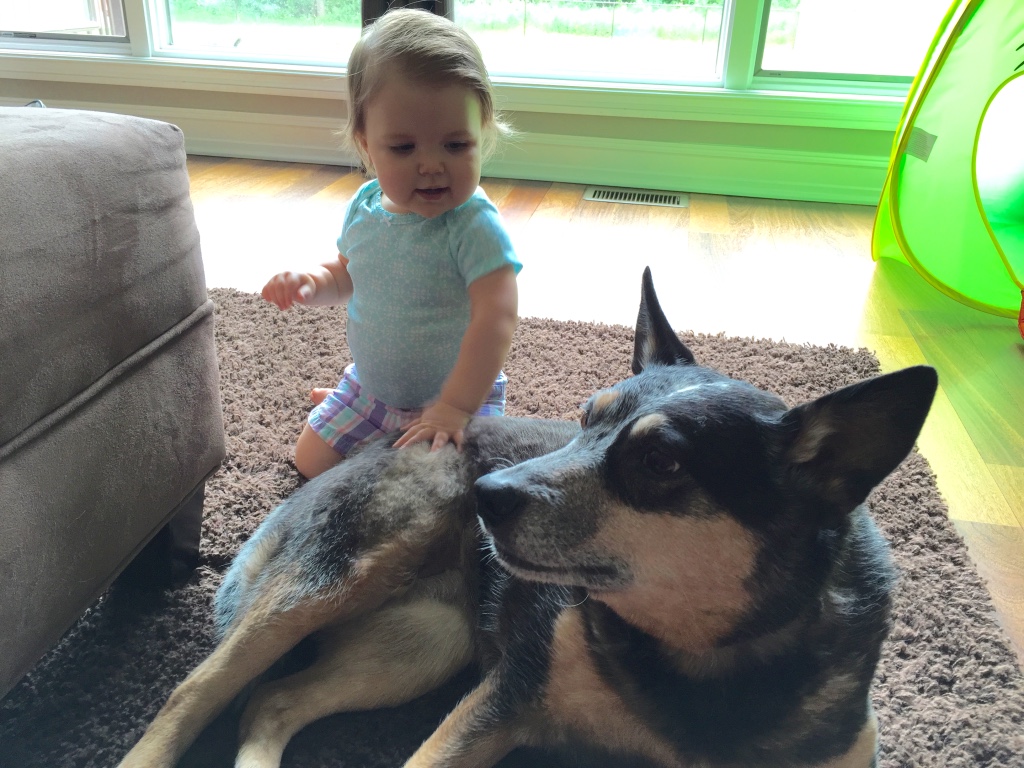 She was not feeling her afternoon nap, but passed out as soon as Matty took her for a walk. 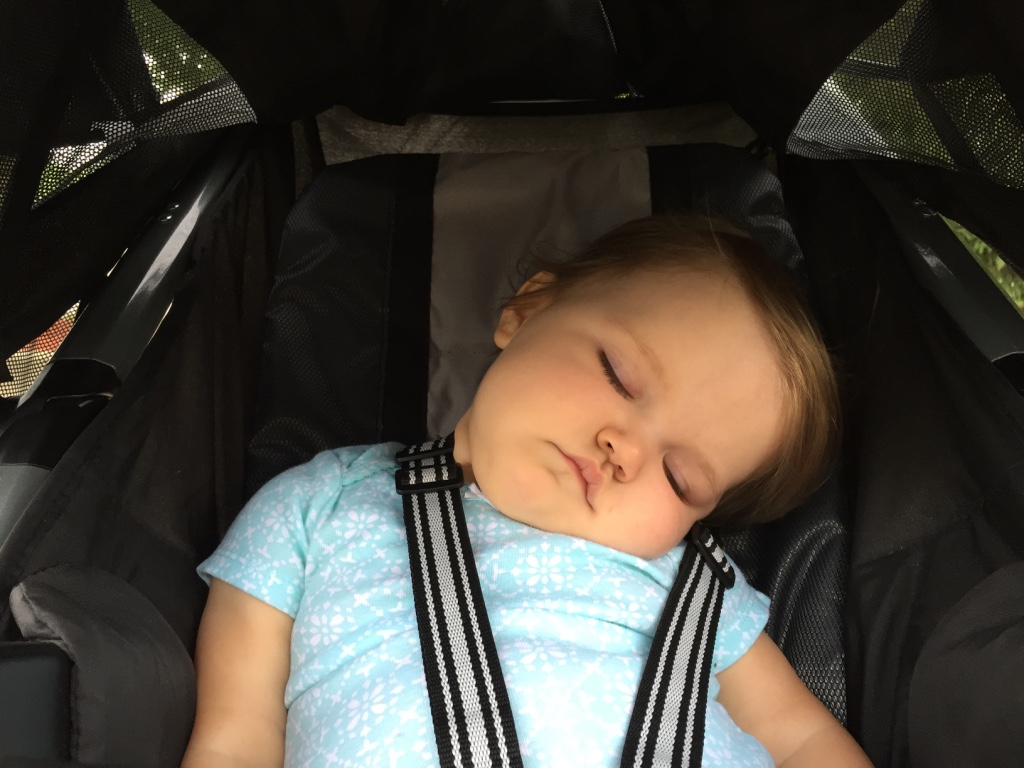 Matty likes to photograph the baby and the dogs together. Don’t they look thrilled?? 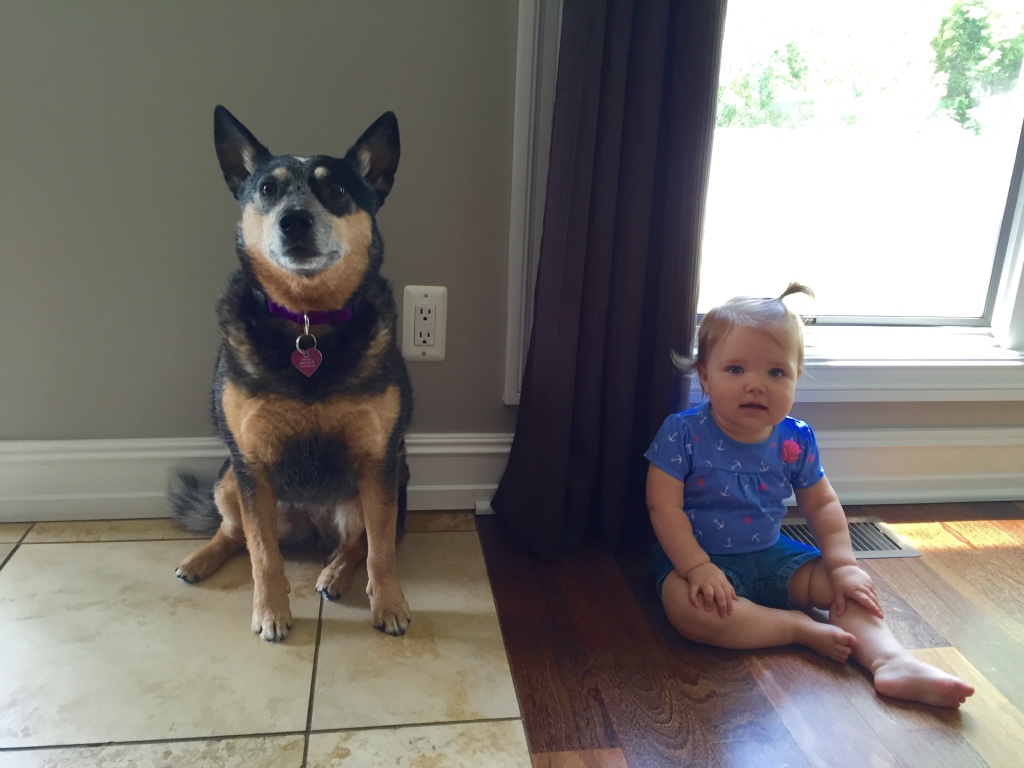 My big adventure for Sunday was a trip to the grocery. Yes, that’s a bag of chocolate chips, organic mac and cheese, and some Nutella that Lucy has in her cart. #healthyeaters
I haven’t cracked open the Nutella yet, so you know that I’m still not feeling back to my normal self, but I’m really looking forward to eating it when I feel better! 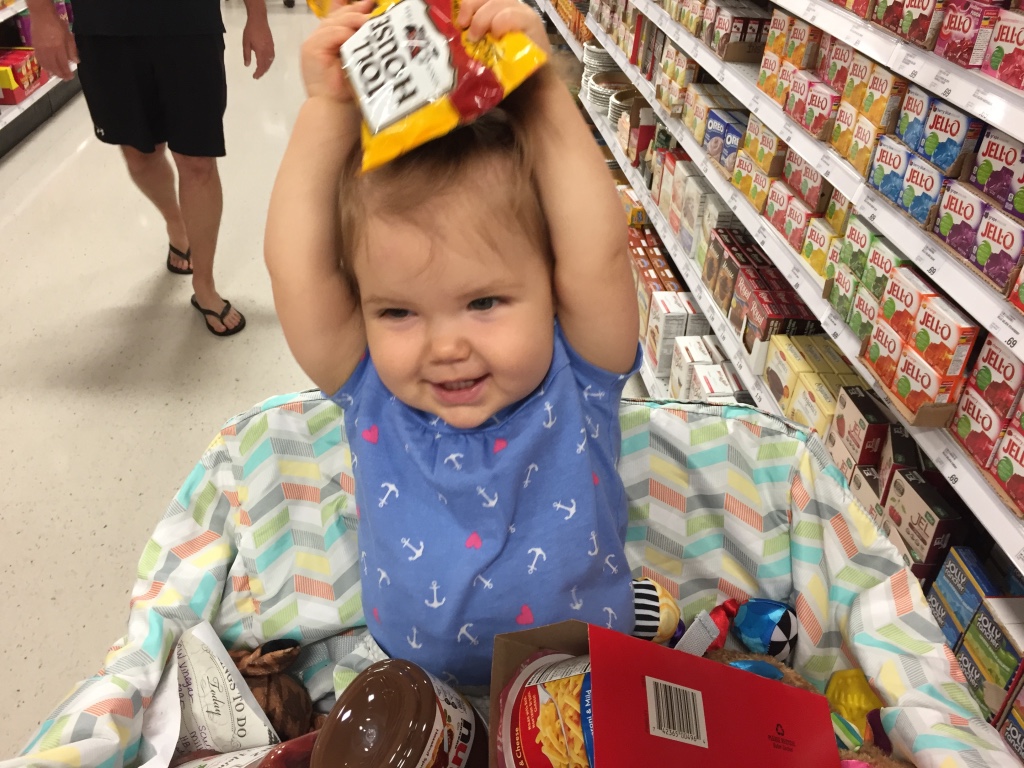 So that’s about it for the weekend. I forgot to mention that Lucy’s going through some sort of sleep regression and has not been going down easily for naps or bedtime. It’s been a real party over here! Thank you to both moms for all of your help, and especially to Matty who really stepped in and took over the Lucy/cooking/cleaning duties. At 9:30 on Friday night, I was passed out in bed and he was folding his second load of laundry. Best hubby ever! #rolereversal
Not too many plans for the week ahead, except for MOMS NIGHT OUT on Thursday which I am really looking forward to! I’m taking a class which started last Wednesday, so I’m already a week behind due to my illness. Eek! Here’s hoping that no one else gets sick!
Have a great week!
XOXO