Oh, hello there.
I know we are only halfway through the week, but it feels like it’s been a long one! Matty traveled to Mexico early Monday morning until Wednesday evening. My mother-in-law graciously volunteered to keep the doggies while Matty was away, so it was just Lucy and mama for three days and two nights.
We have to keep the toilet paper under the sinks in the guest bathrooms because the dogs will pull it off and eat it. I thought that since they were gone this week I could put the toilet paper out. I was wrong. Apparently dogs and babies both share a love of unrolling toilet paper! 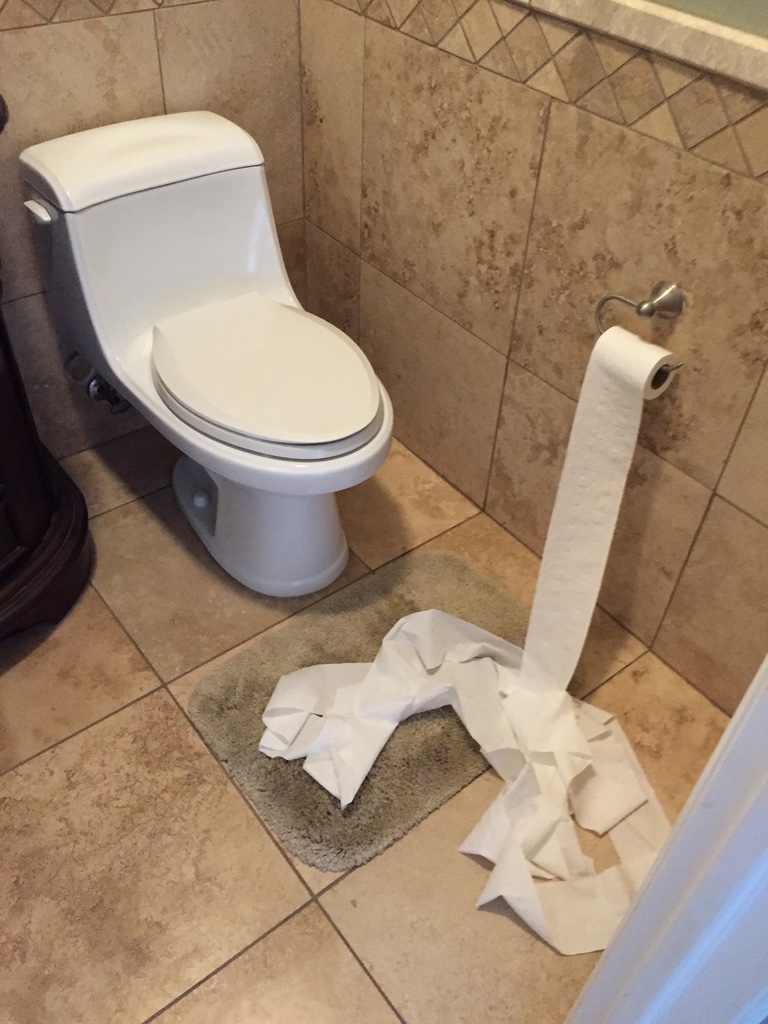 Don’t let that sweet face fool you. A few minutes after I took this picture, Lucy threw both bottles on the ground and then ran her hands across the tray until the Cheerios were on the floor. #wherearethedogswhenyouneedthem 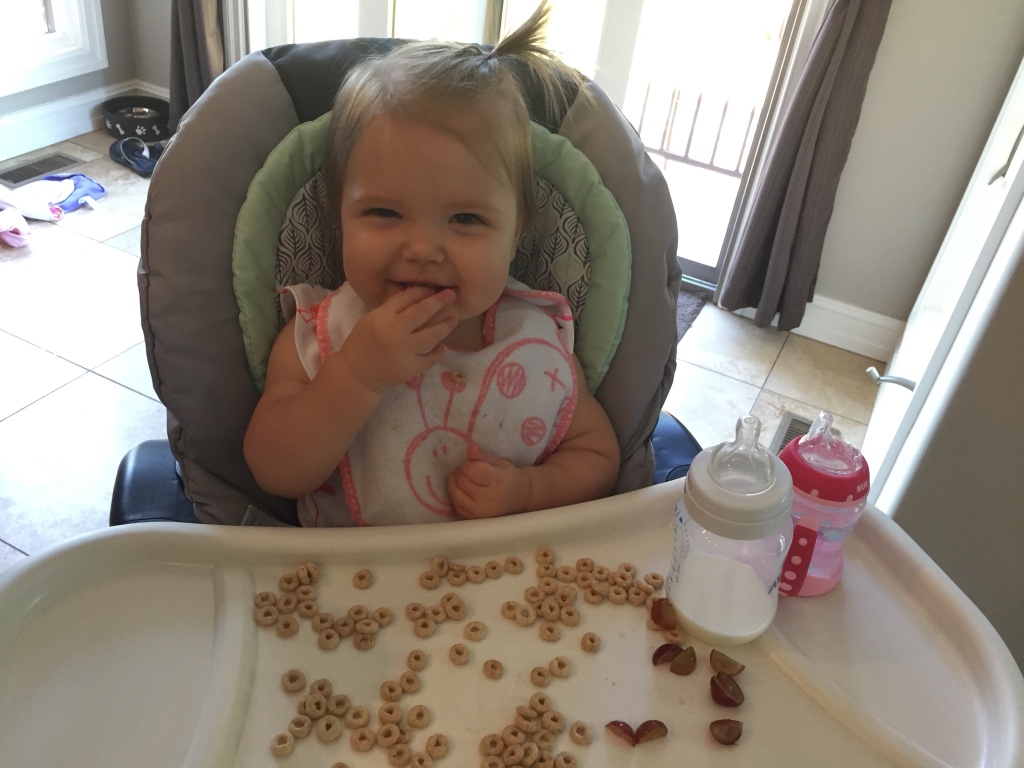 Tuesday was National Selfie Day, so we had to take one while at a picnic lunch with Stephanie! 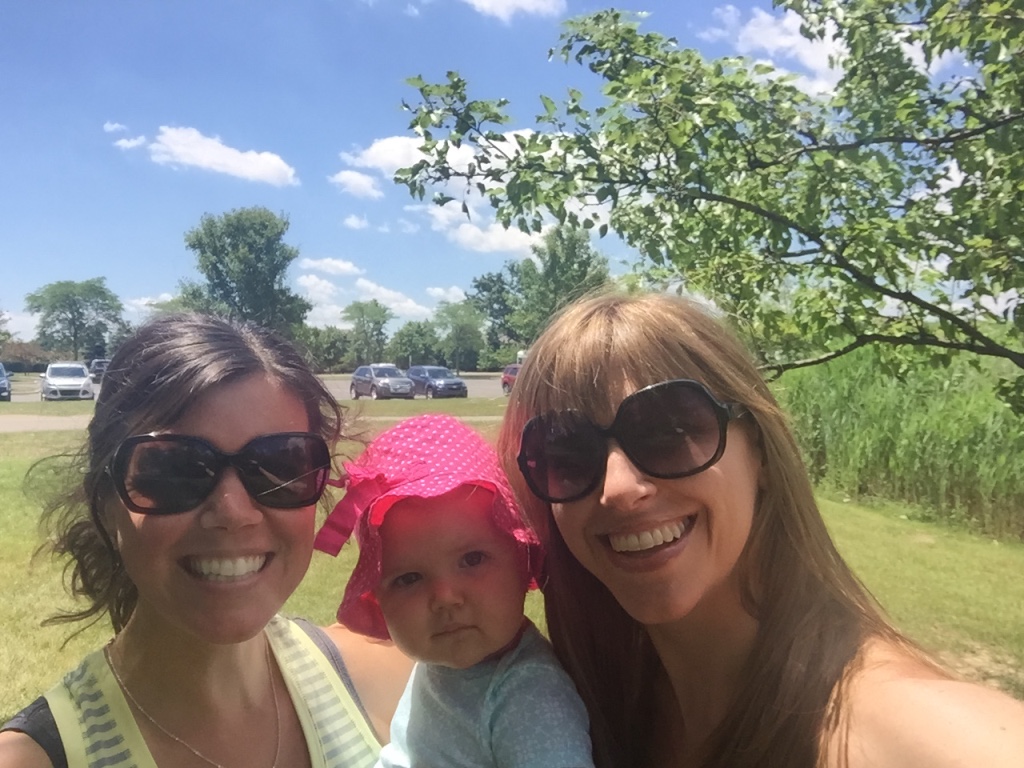 Lucy and I had a major milestone on Tuesday evening. Both of us have been having some major separation anxiety (Lucy is worse, but I don’t love leaving her either). In an effort to help Lucy get used to other people and to help me get a little bit of time to workout, I thought I’d join our city rec center and utilize their Kids Corner. I got a one week trial membership to make sure that we both can handle it. Tuesday evening I took her for the first time, and she was the only baby in the room! Lucy immediately found some giraffes in a toy basket, so that was a good sign! She didn’t cry when I left . . . and I didn’t cry either! After sending off a few texts announcing to people that I had actually left Lucy with someone other than her grandparents, I was able to be on the elliptical for 28 minutes before one of the girls came to get me because Lucy had started crying. 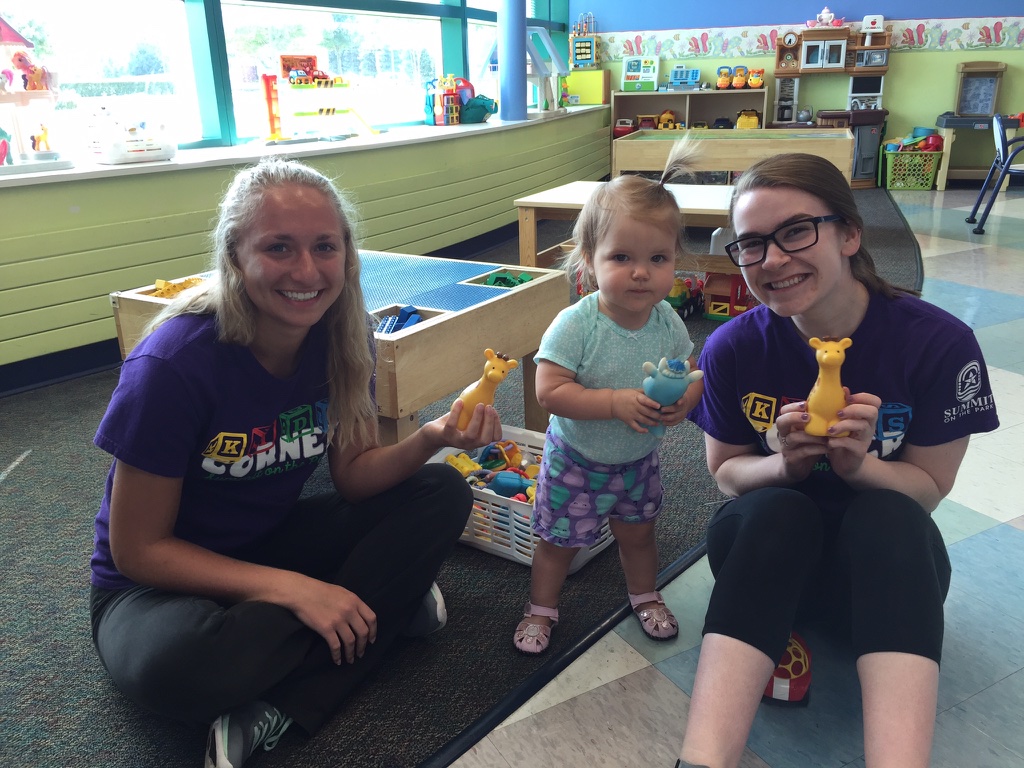 Here’s me all sweaty and red-faced when I went to rescue her. She happily started playing at the Lego table once I arrived. I really want this to work, though, so I took her again Wednesday morning. There were about 10 other kids there and she did great for the 40 minutes I was gone. The ladies said she cried for about two minutes and then started playing again. #babysteps 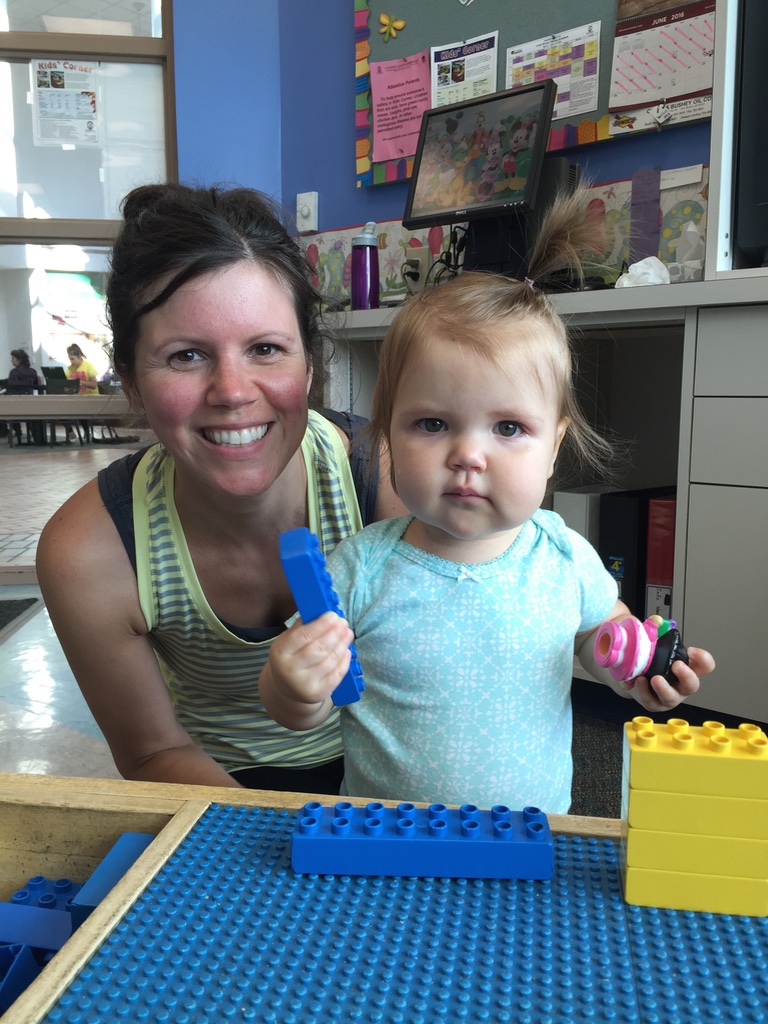 We are usually confined to playing in Lucy’s bedroom or the playroom because the dogs will most certainly eat her toys if left on the floor in the main part of the house. With the dogs gone, both Lucy and I enjoyed spreading her toys out everywhere and being able to play wherever we wanted. However, Matty was gone too, so it was hard to clean up one room before Hurricane Lucy moved on to the next. I was getting her ready for bath Tuesday night and thought I’d document the state of the house.
Books all over her room. 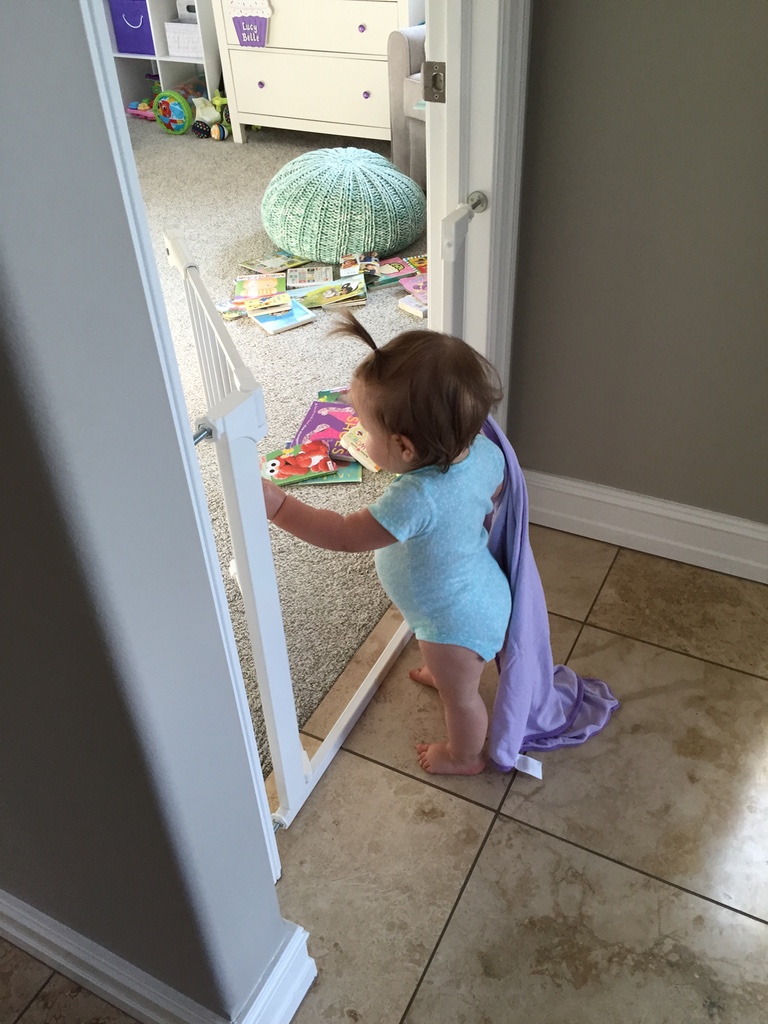 I don’t know why I even bother to fold her towels. 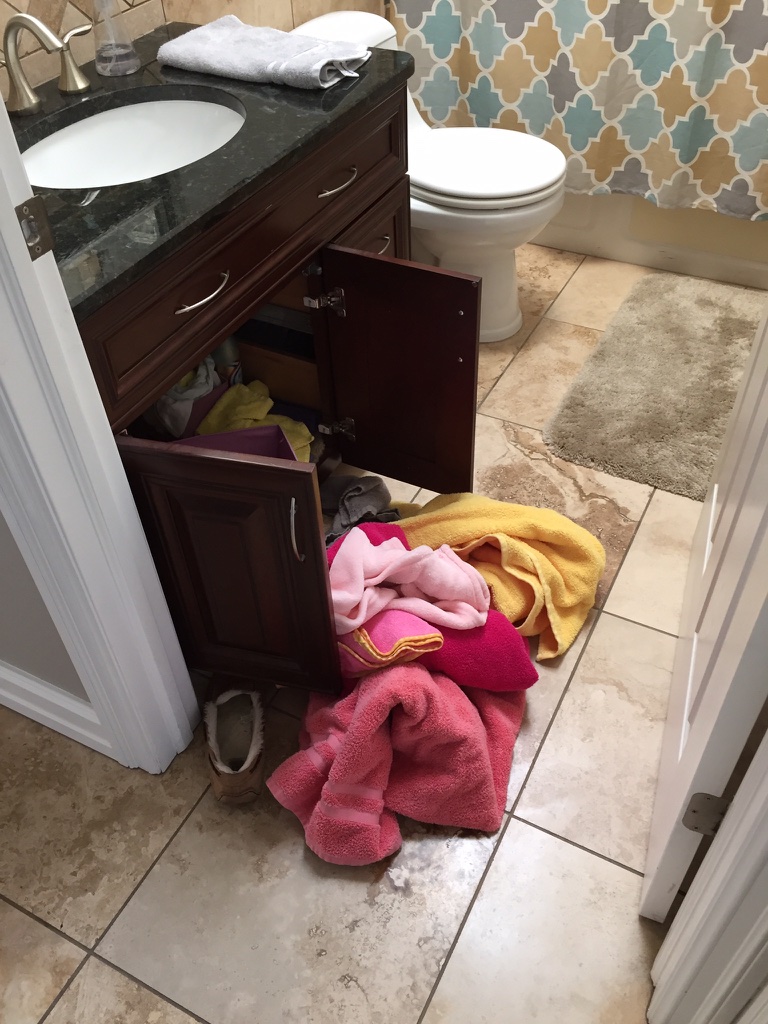 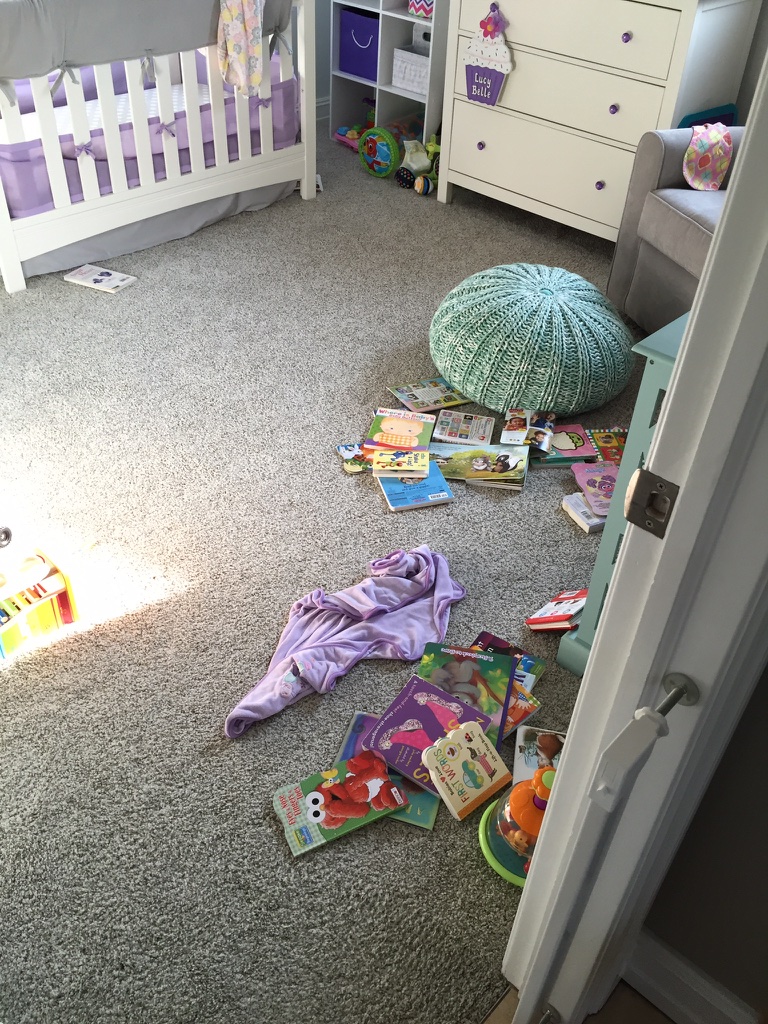 This mess didn’t bother me because we have LOVED spreading out and playing in the family room. 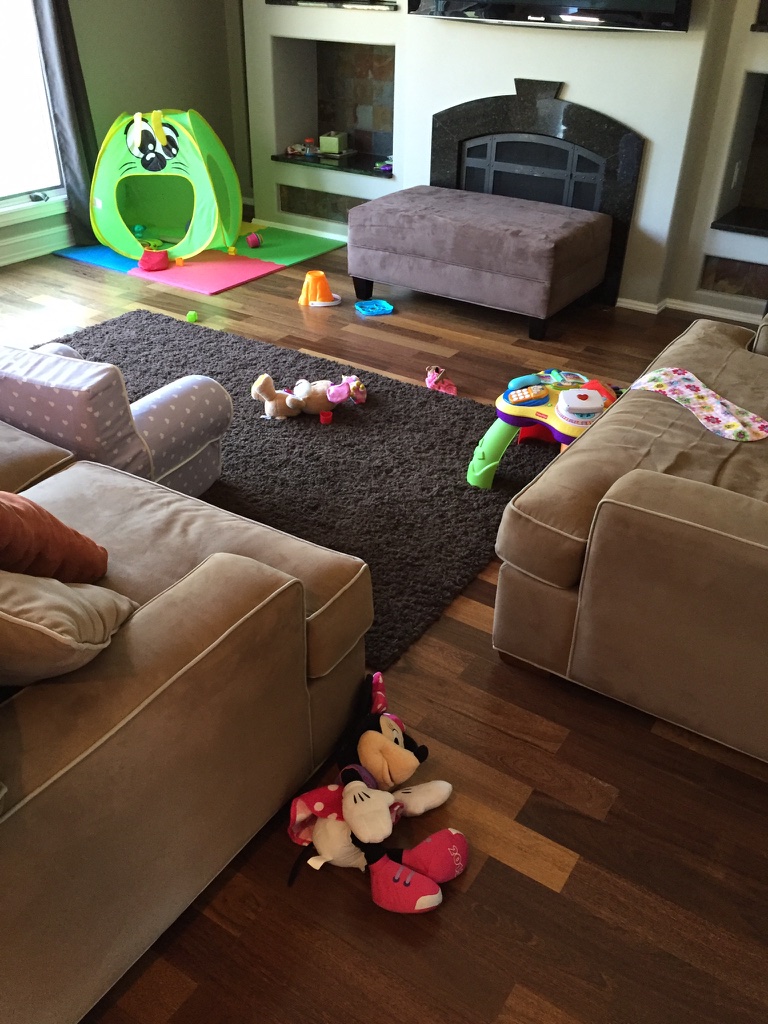 Measuring spoons, cups, and spices in the kitchen. 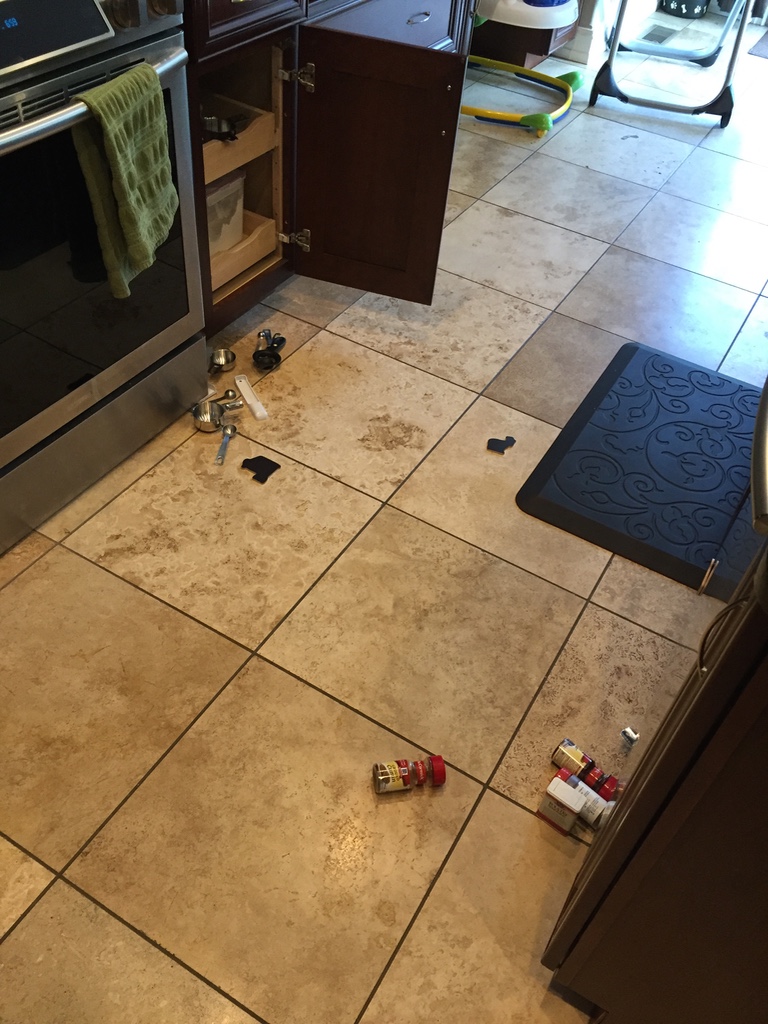 Lucy had some trouble picking out an outfit on Wednesday. She kept throwing things out of the drawer and babbling angrily, which I think meant, “I have nothing to wear!!” #likemotherlikedaughter 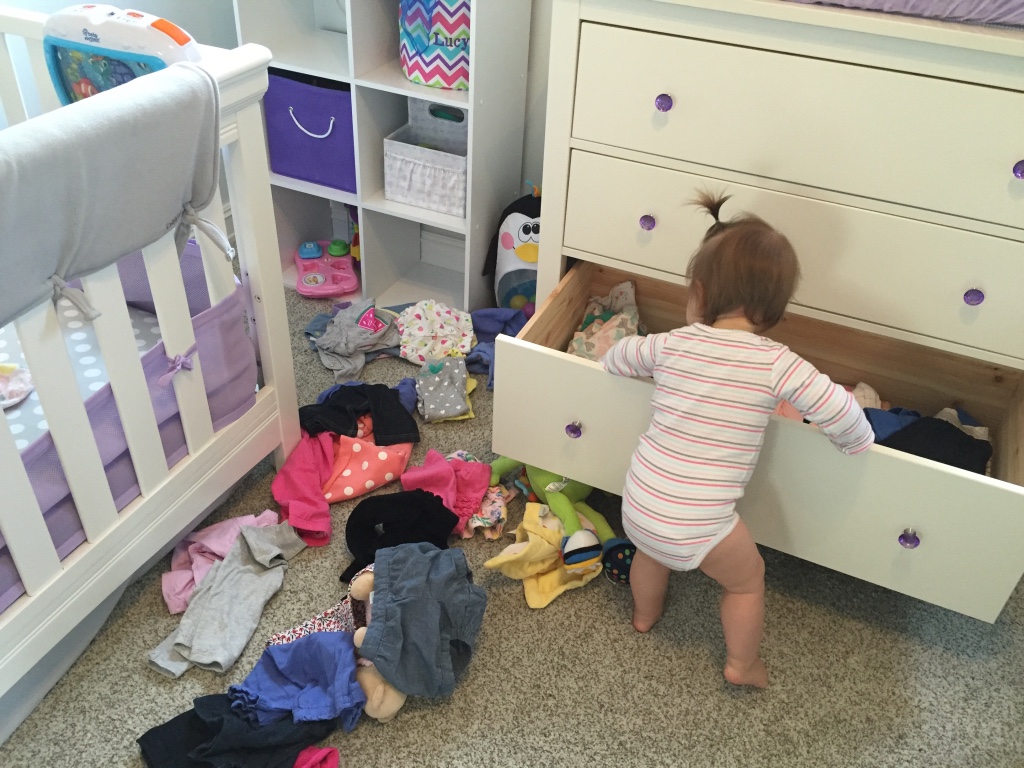 Music in the Park started this week, and we had a great time with our friends. Don’t let that serious face fool you, she had fun. I think she was just bummed that the hat covered up her pigtails. 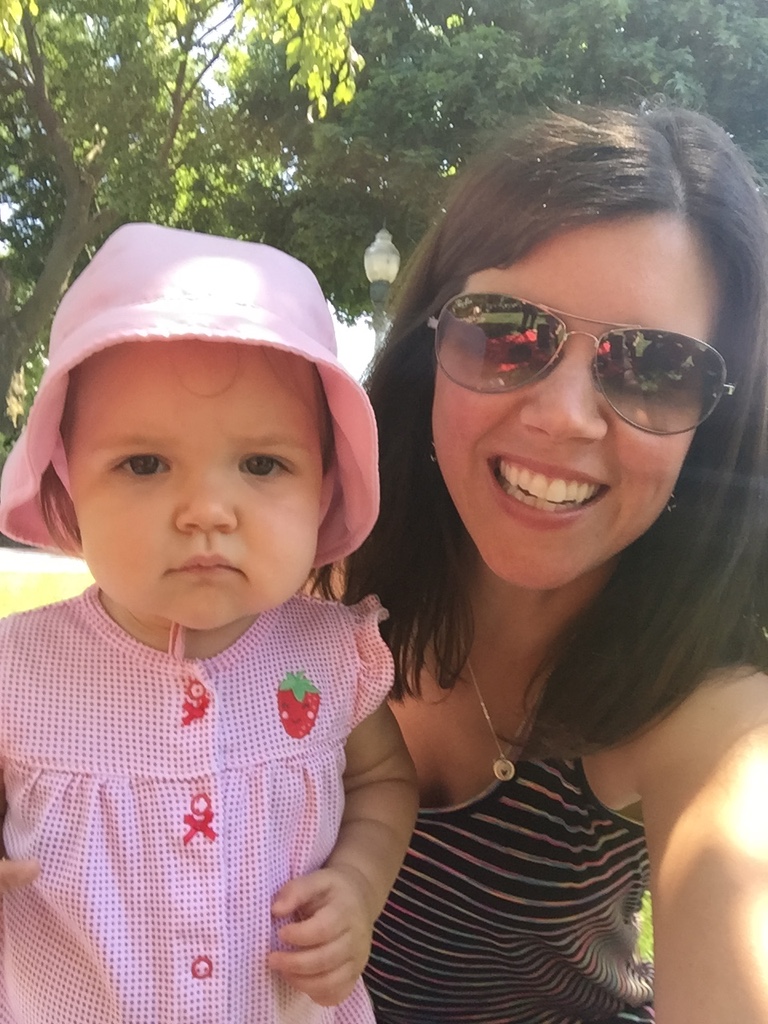 They turned their lunches into a baby community food bank. 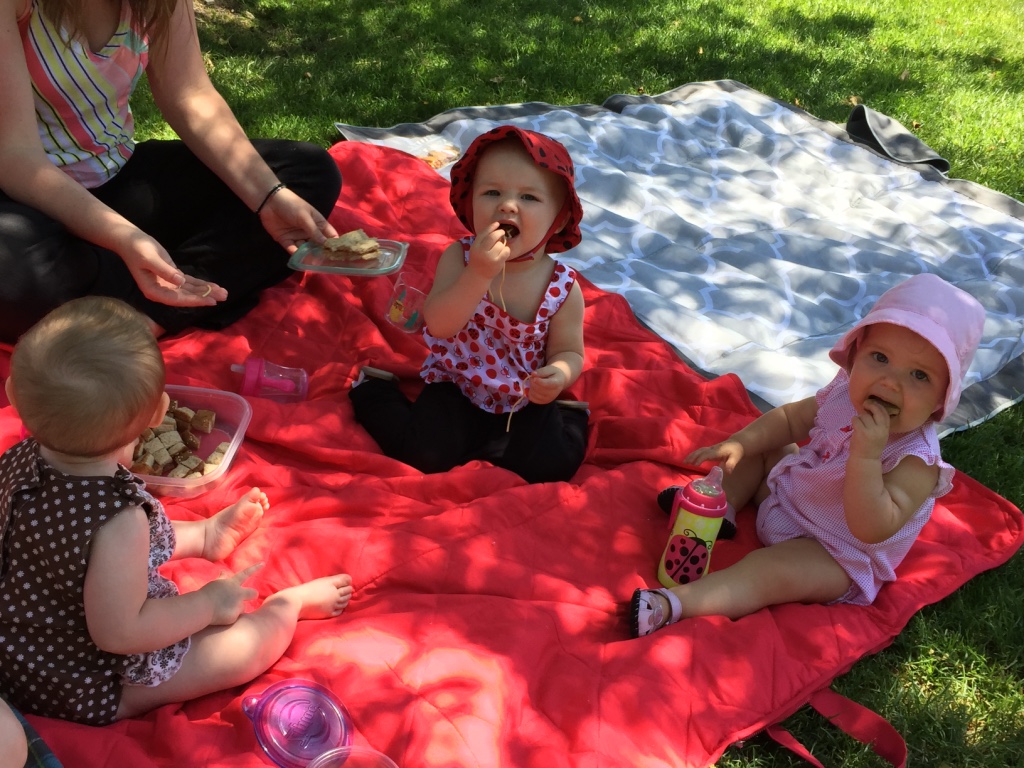 So happy to be by the fountain! 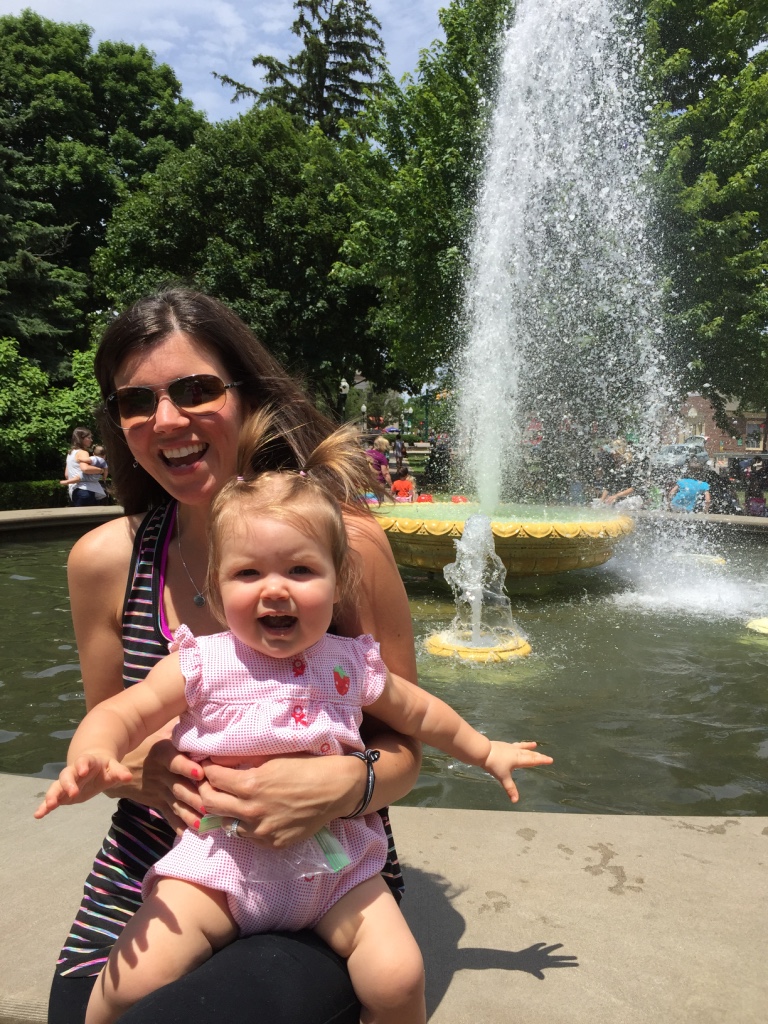 Catherine’s daddy brought her to the playdate today, and he fit right in! 🙂 We missed you, Leslie! 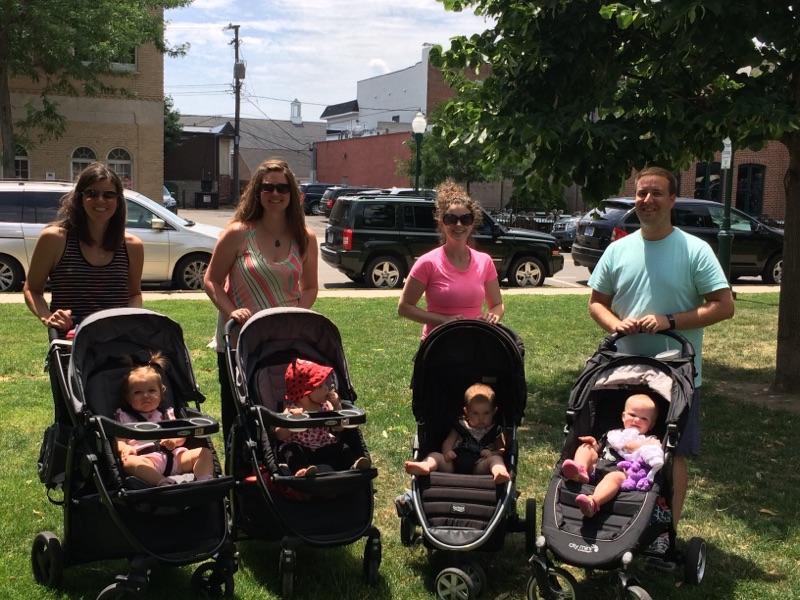 Taking a break from reading. 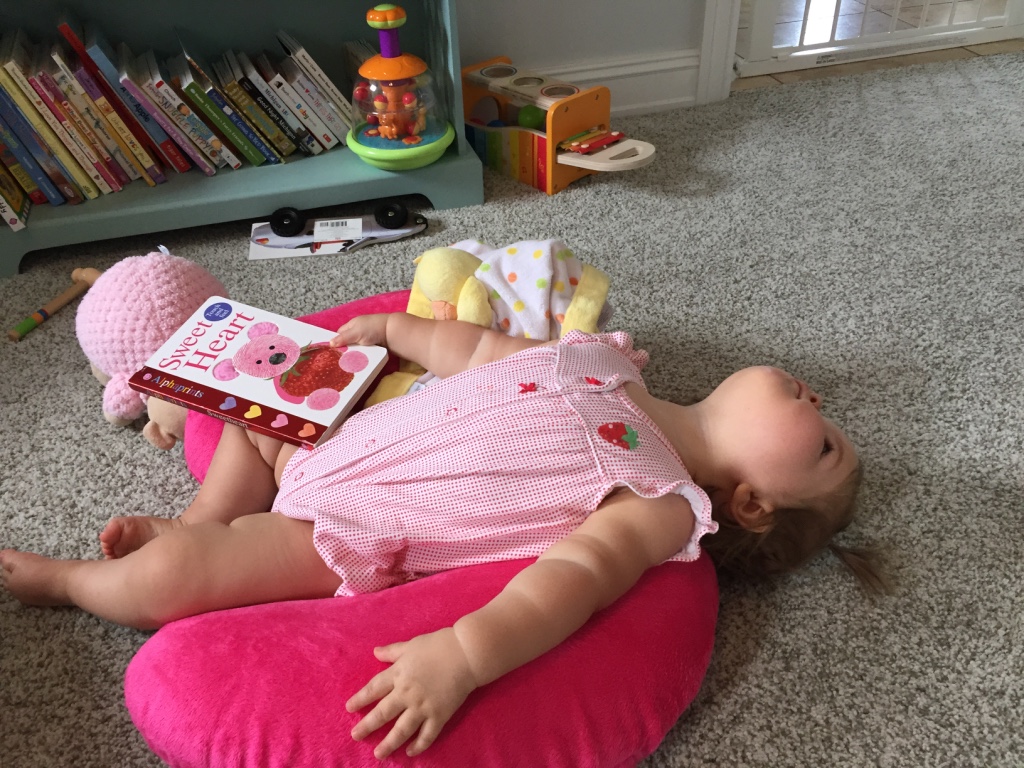 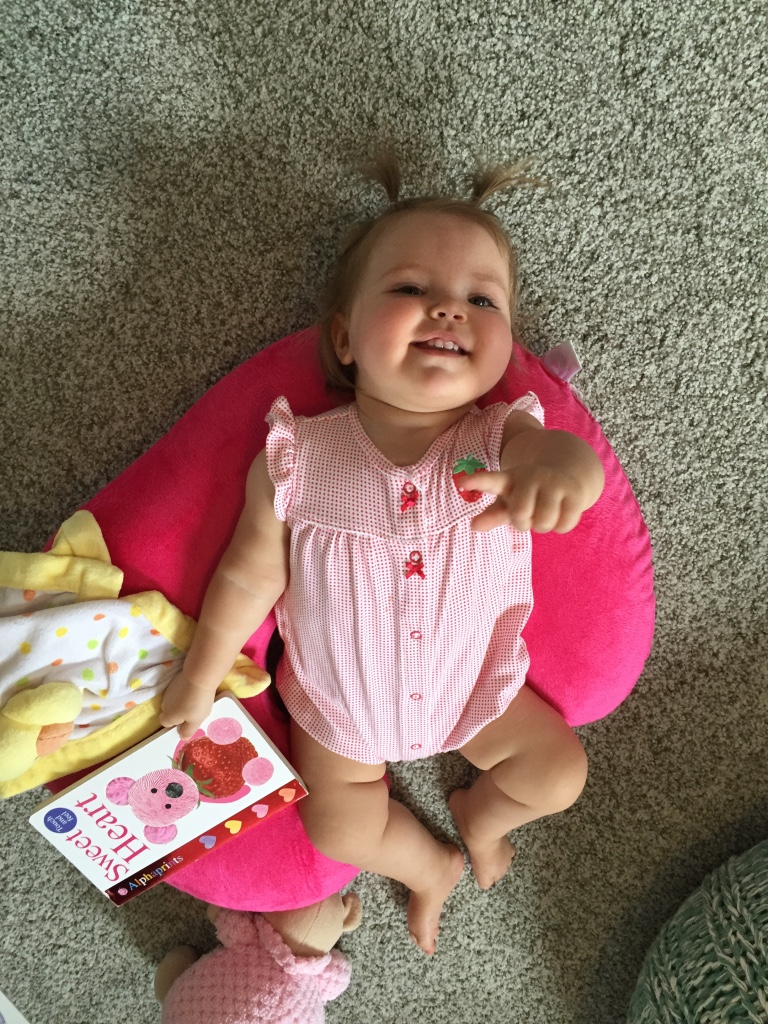 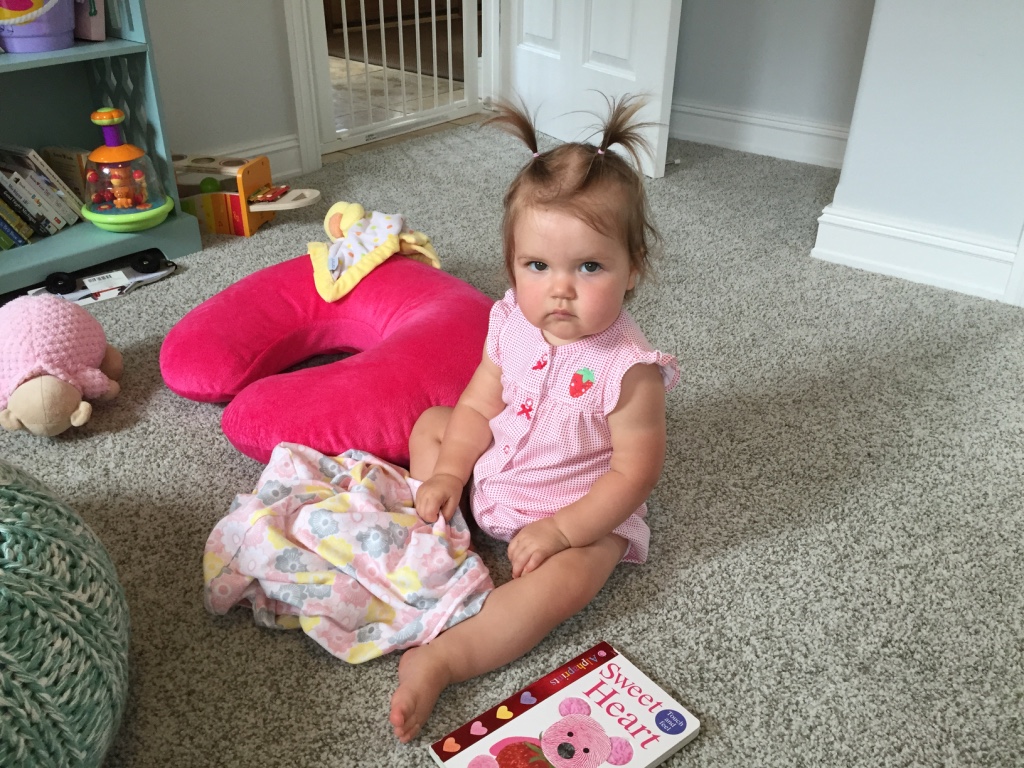 He’s home!!! And already back to his regular nightly routine. #thatsnotwater 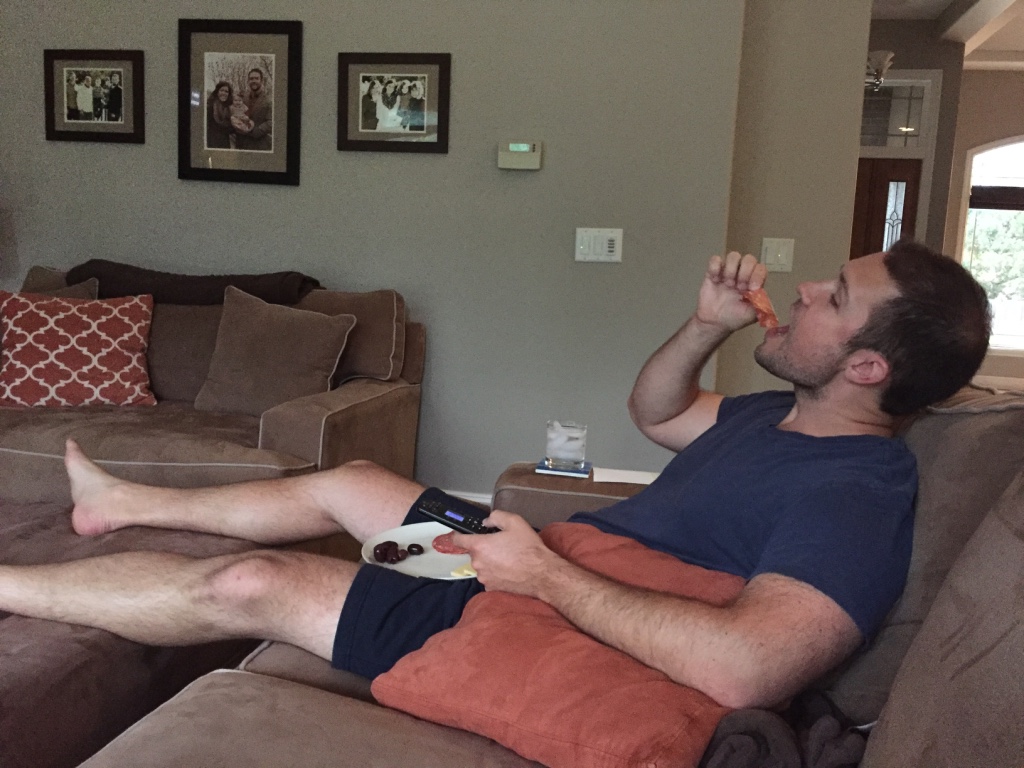 Hope everyone has a great weekend.
Stay cool!
XOXO